Understanding the Science Behind Cholesterol

It has been proven that making use of Ayurveda for high cholesterol issues is an extremely effective way to naturally avoid the negative effects of this widespread health issue – but what is cholesterol?

Cholesterol isn’t inherently bad; in fact, it is a nutrient that is vital for many bodily processes. Cholesterol is actually a fatty acid and while the name may sound negative, it actually has positive effects. In the body, cholesterol is produced in the liver and is utilized in many ways, one of which is the formation of steroid hormones; like testosterone, estrogen, progesterone, and several others. It is also worth noting that cholesterol is a key factor in the synthesis of vitamin D in the body; which is important since vitamin D promotes the growth of bones and the absorption of calcium.  In addition to this, cholesterol is also used by the body for building cell membranes and for the production of bile acid. Cholesterol simply gets a bad rap because of the negative effects that it can have when it is high or unbalanced. The negative effects of cholesterol have become more and more evident over the years and as a result there has been a rising need for solutions.

How Does Ayurveda View Cholesterol?

On the surface, Ayurveda’s perception of cholesterol may seem significantly different than the aforementioned perception that western medicine holds. However, once we take a deeper look at Ayurveda’s understanding of cholesterol, then it is actually easy to see that there are clear parallels between the two. For instance, just like western medicine, Ayurveda never outright states that cholesterol is bad at its most basic level. However, what is stated is that cholesterol is likely to have harmful effects when our bodies contain “ama” – a term that is used to describe metabolic waste that can amass in fat tissue (like toxins). Ama is stated to be the product of improper digestion and improper dietary habits – sound familiar? Another reason why it is smart to consider Ayurveda for high cholesterol is the fact that Ayurveda states that cholesterol important for the structural integrity of the human body; when this cholesterol is properly managed of course. Ayurveda particularly highlights cholesterol’s key role in facilitating the skeletal system and the circulatory system (especially the cellular walls of the arteries and veins); two aforementioned benefits that we have highlighted already. 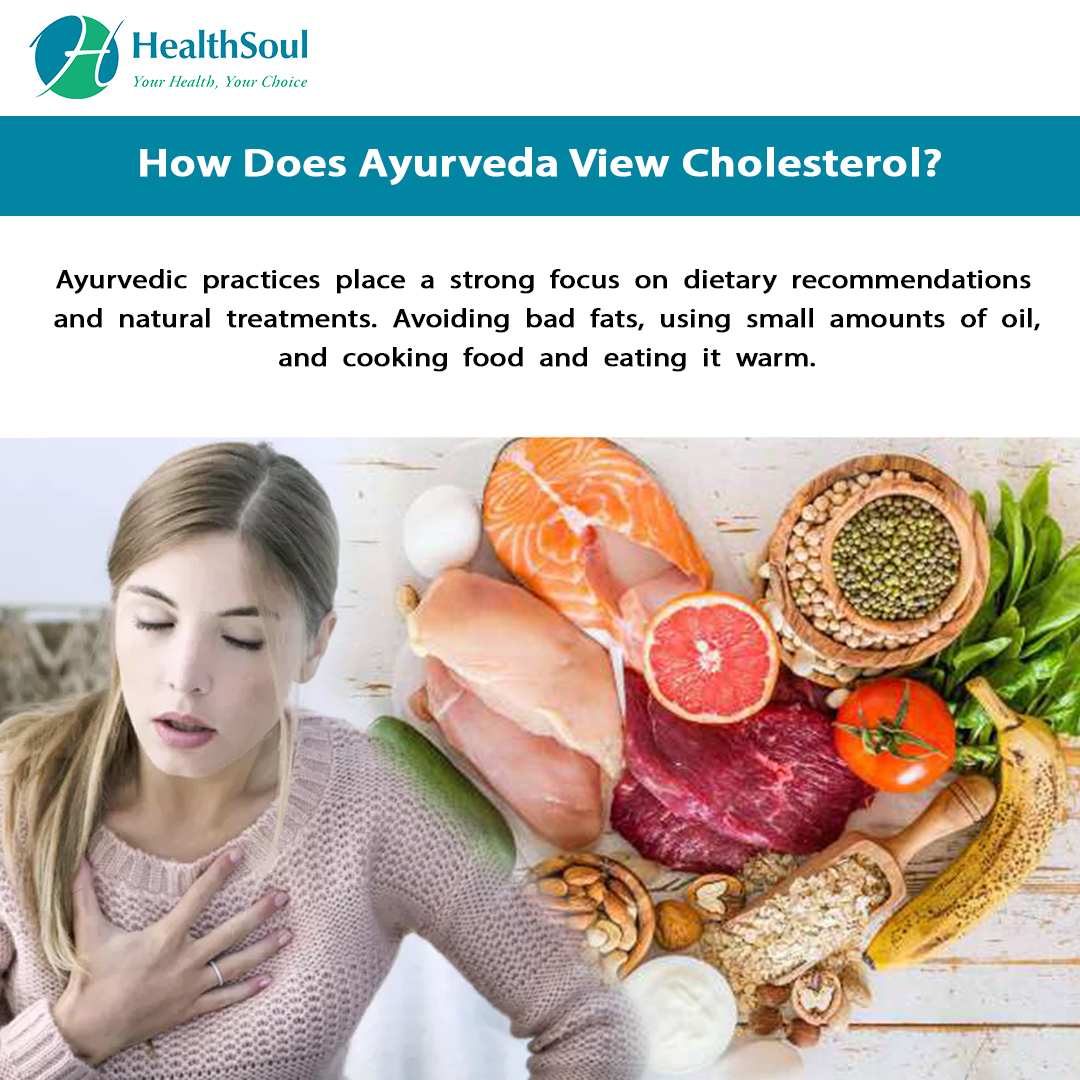 First and foremost, it is important that you make no effort to avoid sweet, salty, and sour foods. While salty in this context is pretty straightforward, many people tend to have a limited view of what can be considered “sweet” and “sour”. As a result, they make uninformed mistakes when trying to adhere to this first point and therefore end up unintentionally going against what they truly need and then making use of Ayurveda for high cholesterol simply does not work. Sweet is not only referring to sugar and sweets but it is also referring to sweet grains as well; such as wheat, breads, pasta, and rice. In addition to this, sweet milk products should not be overlooked as well. On the other hand, sour is often thought of to only include sour fruits like lemons and other citrus; however, vinegar, cheese, and yogurt, are all popular foods that can fall under this umbrella. When making use of Ayurveda for high cholesterol, it is not outright stated that these foods need to be cut out of your diet completely. An intimate understanding of your body (and what it can handle) is needed – maybe wheat is completely off the table but cheese can still be eaten with strict moderation. Our bodies are all different.

On the flip side of this, when considering to utilize the teaching of Ayurveda for high cholesterol,it is actually recommended that you make use of bitter foods and astringent foods.In this context, when it comes to applying these dietary changes, it is important that personal preference does not come into play when deciding what can be categorized as astringent foods or bitter foods. In Ayurveda’s dietary classifications, bitter foods generally encompass a wide range of leafy greens, these can include; kale, spinach, mustard greens, and chard. Likewise, in Ayurveda’s dietary classifications, astringent foods will encompass various types of beans, vegetables, and even fruits as well. Garbanzo beans and split mung dhal are examples of beans that are okay; however, it is recommended that larger beans be avoided. Fruits that fall into the astringent category include pears and apples; while vegetables that fall into the astringent category include cabbage, broccoli, and cauliflower.

As is to be expected, when it comes to making use of Ayurveda for high cholesterol, Ayurvedic practices place a strong focus on dietary recommendations and natural treatments. Avoiding bad fats, using small amounts of oil, and cooking food and eating it warm, all other simple but effective means of countering the negative effects of cholesterol.