Ancient Greeks had used St. John’s wort to treat many internal and external diseases. Hypericum perforatum is the botanical name of this herb found throughout temperate regions, including European, American and Asian countries. Since ancient time, this herb is effective to treat different mental conditions like anxiety, depression, burns, and cuts. Later researchers discovered this herb has potent neuroprotective, antioxidant, anti-inflammatory and antimicrobial properties.

After discovering these therapeutic benefits, many European pharmaceutical companies started to prepare St. John’s wort containing herbal formulation and earn several billion dollars. The efficacy of this herb is tested through both animal and human trials and also identify the possible mechanism of action of this herbal medicine. [1]

What are the phytochemicals present in St John’s wort? 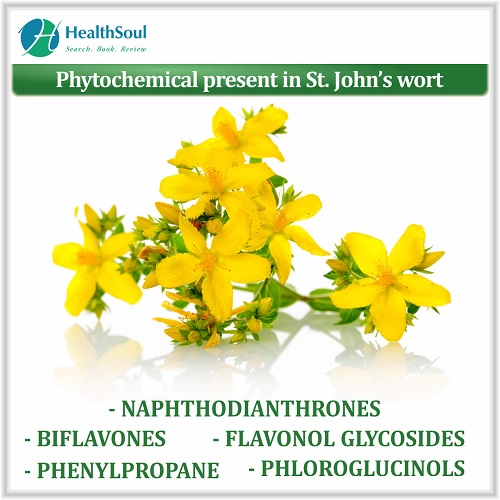 What is the mode of action of St John’s wort benefits?

Hyperforin is another phytochemical present in St. John’s wort, which acts as a serotonin uptake inhibitor. Treatment with this antidepressant increases the concentration of both Na+ and Ca2+ ions. [1] 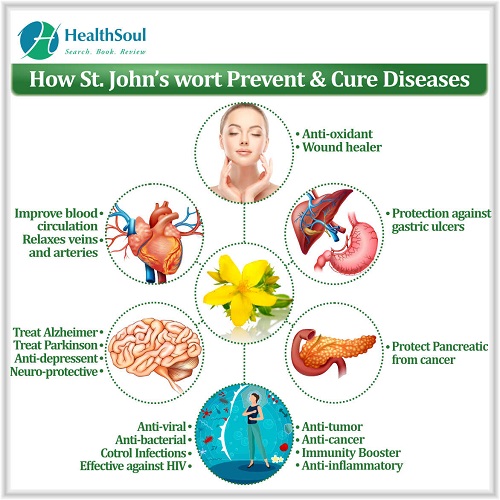 What are the different forms of St John’s wort?

St. John’s wort herbal preparations usually recommended for adults, however, a pediatric study also reported this relatively safe to use for children having mild to moderate depression problem.

St. John’s wort herbal tea and liquid extract are also available. It is advised to take experts opinion for dose determination. Usually 3 to 6 weeks treatment period require to check the efficacy of St. John’s wort herbal preparation. Experts also recommended not to stop the drug suddenly, as it may cause a side effect. Gradually lower the dose before complete stopping of the medicine. [2] 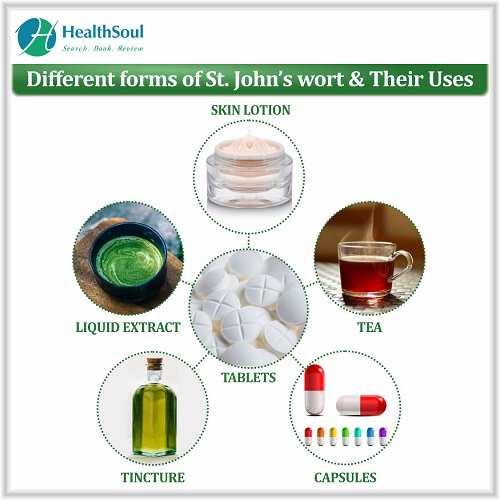 The primary use of St. John’s wort containing medications is an anti-depressant. Apart from depression, this herbal medication has other uses also which include treatment for obsessive-compulsive disorder, attention-deficit hyperactivity disorder, and menopausal symptoms. It is also widely used as natural chemotherapy agents. [3]

Incidence of depression is increasing day by day due to the increased rate of neurochemical disorder. Many synthetic antidepressant medications are already available in the market, but they often cause an adverse reaction for long term use. The anti-depressant property of St. John’s wort herbal remedy is well established through different research studies. It is a relatively safe natural alternative treatment for mild to moderate depression symptoms. A placebo-controlled clinical trial reported that John’s wort herbal remedy gives significantly better result than the placebo-controlled group and the effect is comparable with synthetic antidepressant medications. [1]

This herbal remedy effective against MRSA and PRSA bacterial infection, which cannot be treated by using conventional antibiotic treatment due to resistance development.

Not only bacterial infections but viral diseases like influenza can be controlled by treating with St. John’s wort herbal remedy. Some of the active constituents have identified with have efficacy against HIV infection. Herbal researchers are quite confident that this could be a non-expensive alternative AIDS treatment shortly. [1]

The photodynamic therapy is previously applied for skin lesions, but nowadays this property active against tumor development. [1]

St. John’s wort has a neuroprotective effect due to its potent antioxidant property. This helps to treat oxidative stress-related neurodegenerative disorders such as Parkinson’s and Alzheimer’s diseases. [1]

The anti-inflammatory property of this herb is effective to control colonic inflammation and provide protection against gastric ulcers. [1]

St. John’s wort is a safe herbal medication within the therapeutic dosage. But increase dosing causes side effects like allergic reactions, gastrointestinal symptoms, lethargy, dizziness, restlessness, confusion, and dryness of the mouth. But these adverse effect list is quite short than the conventional synthetic antidepressant medications. Acute neuropathy may occur in a toxic dose. AIDS patients may show cutaneous phototoxicity with a large dose of hypericin due to interaction with conventional anti-AIDS treatment. Individuals who are undertaking St. John’s wort medications should take precautionary measure during sunlight exposure.

Drug-drug interaction is a common incidence with St. John’s wort herb. This herbal preparation usually enhances the activity of other drug’s action by interacting with liver enzyme activity. 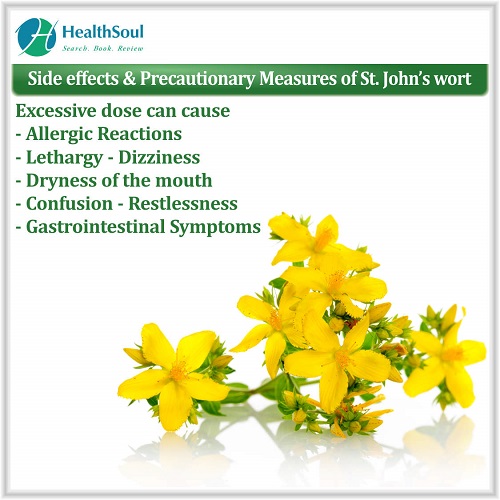