How Smartweed or Polygonum hydropiperoides benefits were found?

Smartweed or Polygonum hydropiperoides belong to the Polygonaceae family. All the herbs belong to the Polygonum genus are referred to as the multiple nodules present in the stem. The name of this genus is derived from the Greek language – word poly indicates multiple and goni means knee or joint. In 1789, Antoine Laurent de Jussieu had first mentioned this herb name in his book Genera Plantarum. [2]

Smartweed is an annual herb and moist soil like waterlogged areas are a favorable condition to grow this herb. This herb is not only used for medicinal purposes but also used as fodder for ducks, small birds, small mammals, and aquatic animals. This plant also helps to maintain aquatic ecological balance. Australia, New Zealand, North America, Temperate Asia are the places where this plant is widely found.[2]

Smartweed has white seasonal flowers, which are mainly grown in July to August months. [1]

In the traditional medicinal system, all the plant parts of the smartweed have used. Flavonoids are the major phytochemical of this plant exert numerous health benefits. Along with the folk medicinal application, Smartweed is also used for cooking purposes or as a spice due to its peppery taste. Traditionally this herb recommended for rheumatism, epilepsy, gout, and toothache. The juice of this plant helps to eradicate the worms from the ear canal. Following are some of the traditional medicinal application of this herb:

Traditionally leaf juice of this plant leaves used to lessen the loss of appetite, gastric ulcer, liver enlargement, dysmenorrhoea, toothache. Roots of this plant are also used as anthelmintic, carminative, tonic, diuretic, and stimulant. In the folk medicinal system, leaves and seeds are recommended for cancer treatment. High vitamin C content in Smartweed fresh leaf helps to cure scurvy. The leaf of this plant used as herbal tea, which is a useful remedy for digestive disorders like dyspepsia, diarrhea, dysentery, colic and intestinal worms. [3]

What are the phytochemicals present in Smartweed or Polygonum hydropiperoides?

Smartweed contains phytochemicals are flavonoids, glycosides, phenylpropanoids, sesquiterpenes, and sesquiterpenoids. [4] The plant is harvested from wild sources during the flowering period and then shade dried under 40ºC. But the dried plant contains less amount of active constituents as some of the bioactive constituents destroyed during drying. Therefore, it is preferable to use fresh plant or plant parts for medicinal purposes. [2] 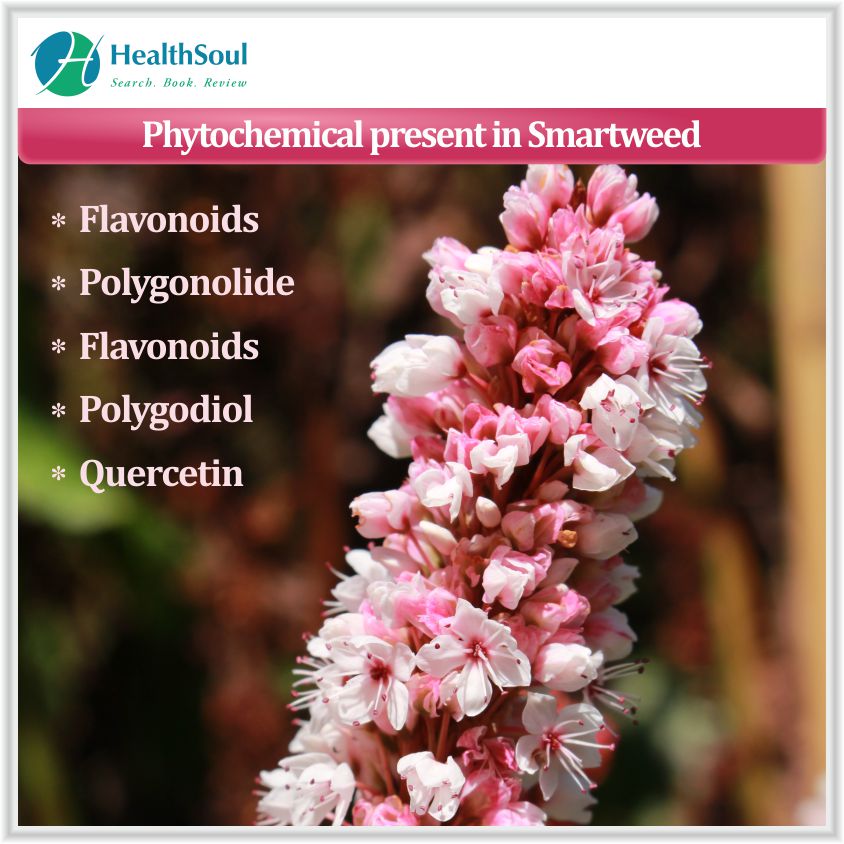 What is the Mode of action of Smartweed or Polygonum hydropiperoides health benefits?

What are the different forms of Smartweed or Polygonum hydropiperoides? 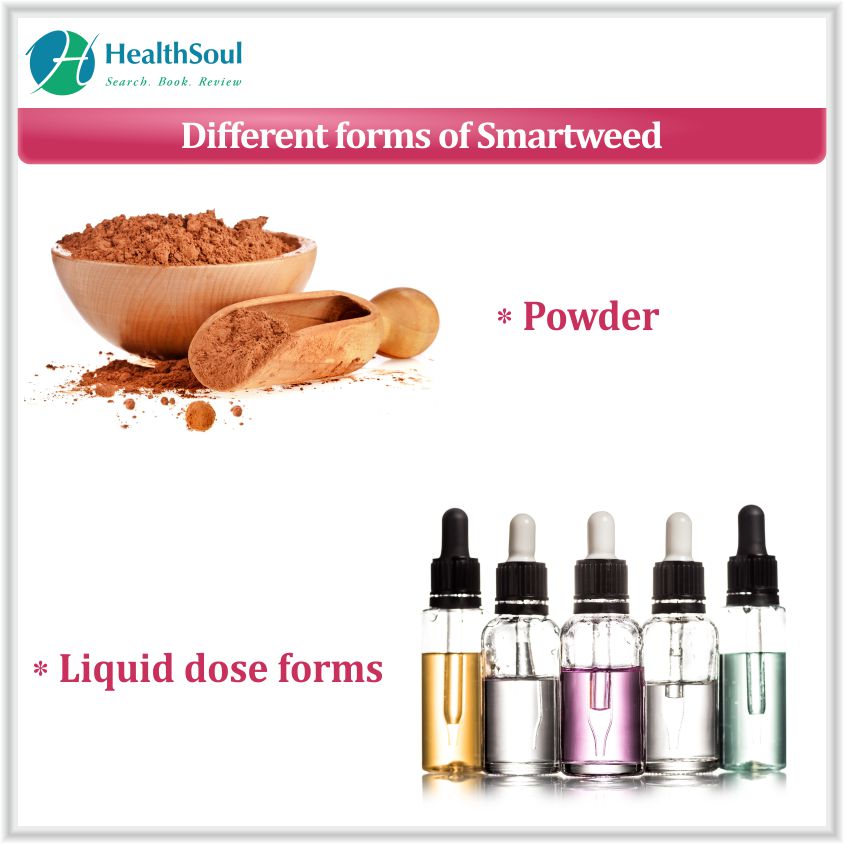 This plant has multiple medicinal properties like antipyretic, astringent, emmenagogue, diuretic, stimulant, styptic. Every plant part has some specific medicinal application; for example: 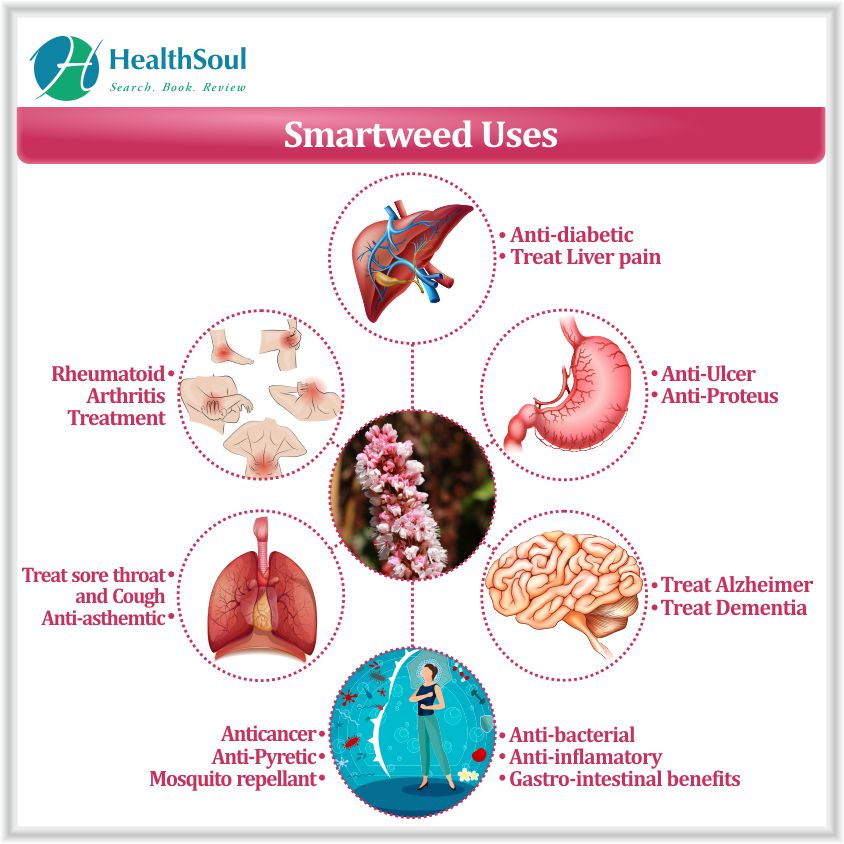 The anti-inflammatory property of smartweed is beneficial for Rheumatoid arthritis treatment. The whole plant parts extract topically applied to the affected joint to reduce the soreness and swelling. [3]

The gastro-protective action of Smartweed helps to prevent gastric ulcers due to its urease inhibitory and anti-proteus activities.[3]

Smartweed has neurocognitive disease protection activity by preventing the modulation of superoxide anion release from neutrophils. This mechanism helps to prevent dementia.

β-sitosterol isolated from Smartweed acts against choline-esterase due to its antioxidant property. An animal research result reported that β-sitosterol treatment can gradually improve working memory, motor coordination, and spontaneous behavior changes. These beneficial effects are helpful for Alzheimer’s disease. [3]

This herb improves gastrointestinal motility, which helps to prevent constipation and improve digestion.[3]

Smartweed can reduce body temperature due to its antipyretic action.[3]

Diabetic patients can include Smartweed supplementation in their daily diet to control their blood sugar level.[3]

The plant juice extracted from plant parts is an effective treatment for both Jaundice and cholera. [3]

The phytochemicals present in Smartweed has Mosquito repellant. It kills the larva of Anopheles stephensi and Culex quinquefasciatus mosquitoes. [3]

Smartweed or Polygonum hydropiperoides Side effects

A mild to moderate dose of Smartweed is safe to use. But an increased dose of this herb can cause digestive system irritation. The sap secreted from the fresh plant of Smartweed causes skin irritation. [3] 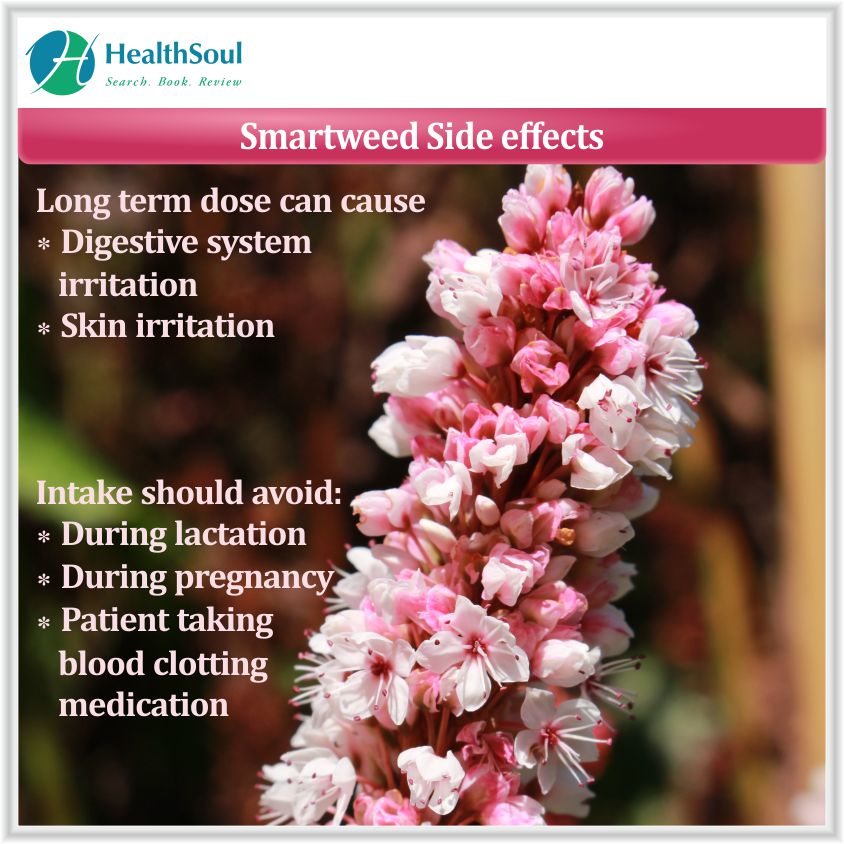 When I should avoid Smartweed or Polygonum hydropiperoides?