An intern serving the neediest at NRS Medical college, Kolkata, Dr. Paribaha Mukhopadhyay, suffered depressed skull fracture. This was result of an attack by a 200 strong mob; consisting of the relatives and acquaintances of an elderly gentleman who died while receiving treatment at the NRS Hospital. The brutality of this incident lead to more than a week long impasse of medical fraternity going on work strike seeking stringent laws and safe workplace environment. This disrupted the health care again for the most needy and vulnerable who depend on Government funded healthcare centers. It is imperative to note that the employer in this case State Government is required to provide a place of employment that is free from recognized hazards. We explore violence against health-care practitioners in India to understand its reasons and prevention.

Violence against physicians: Is this problem specific to India or a global issue?

Health care system in India is rife with infrastructure and human resource constraints. The charge for Governmental facilities initially was to help with disease prevention, vaccination, and maternal child health and they have done a great job at achieving these goals. The expectations are changing with aging of populations, and a growing population and economy. One would probably assume that violence against healthcare providers is more common in India or similar developing countries. 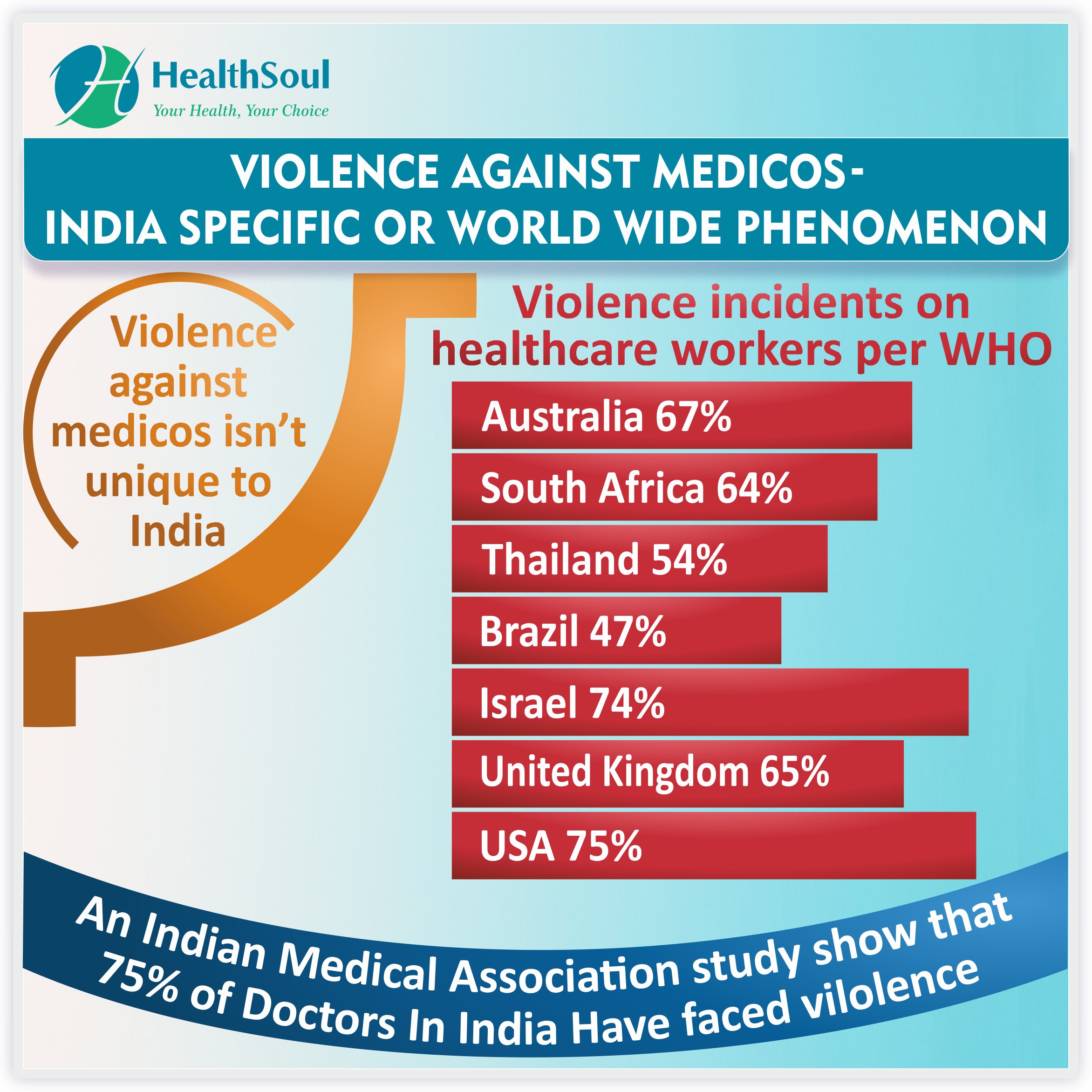 A WHO Publication indicates that more than half of health care providers around the world faced at least one incidence of violence (physical or psychological) in the past year: Brazil (47%), Thailand (54%), South Africa (61%) and United Kingdom (65%), Australia (67%), and Israel (74%). In the United States, 3 out of every 4 cases related to workplace violence are reported from the health care set up. The severity and consequence of these incidents in countries excluding US with high gun violence. About 3 out of every 4 reported workplace violence in the US of nearly 25,000 reported each year occurs to workers in healthcare settings.

An Indian Medical Association study came to a conclusion that 75% of doctors in India have faced violence at some point or the other in their careers; most cases being reported form ICUs (Intensive Care Units) and the perpetrators commonly being patient attendants. In conclusion, violence against medical practitioners is fairly prevalent across the globe and is not confined to India or the developing nations.

Possible Reasons for Such High Rates of Violence 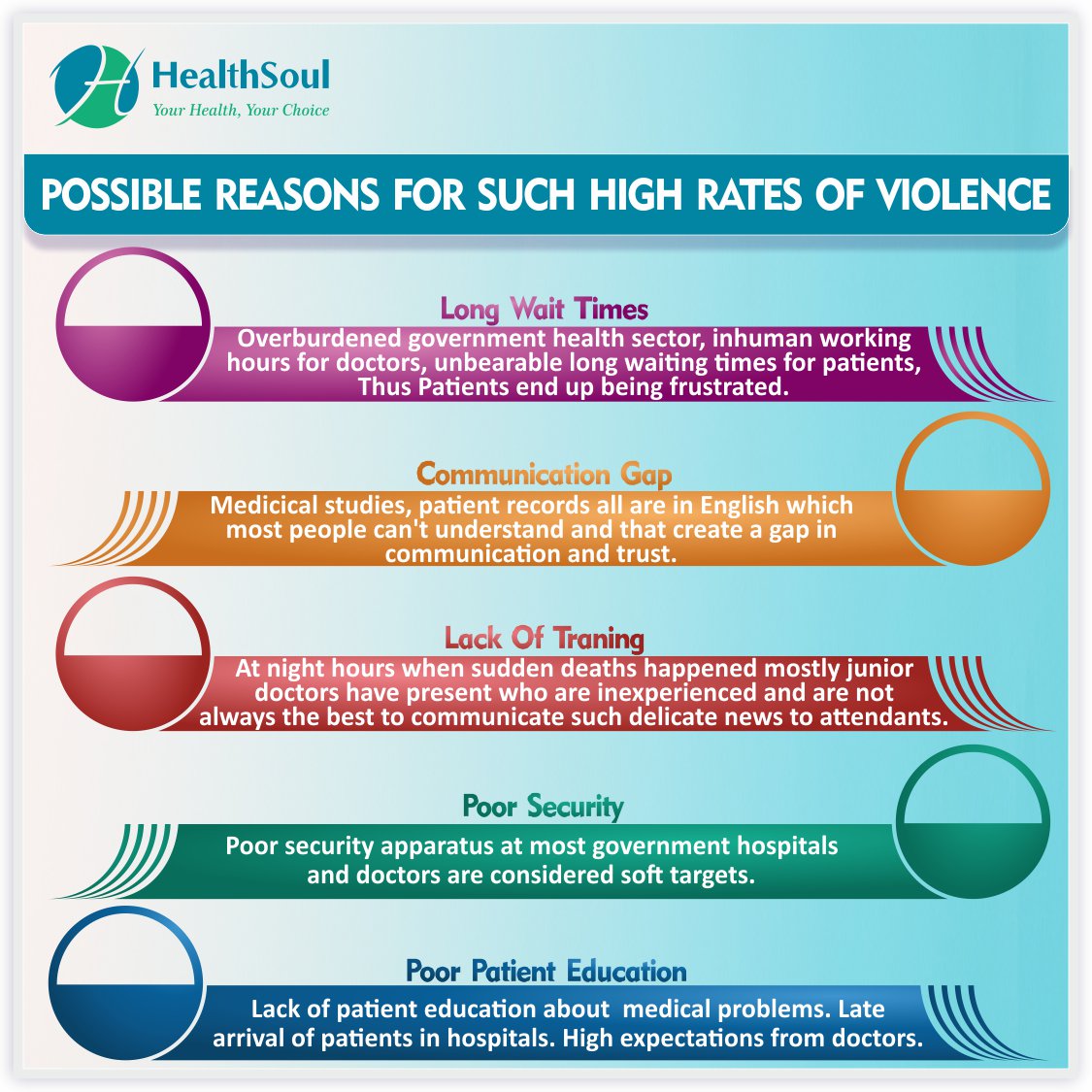 1. Mismatch between expectations from healthcare system, and reality leading to frustration may play a large role. Frustrations start with long wait times, crowding in clinical areas, delay in treatment due to access to diagnostic and treatment modalities.

2. Lack of healthcare infrastructure to support the needs of a growing population in cities as well as human resources affecting the emotional wellbeing of healthcare provider’s esp. those in training who may be spread too thin.

3. Lack of education among patients and their relatives about the health condition

4. Financial constraints on family members and lack of transparency and forthrightness about expenses can be a source of frustration.

5. Poor settings and communication in breaking adverse news to family members including lack of proper training among trainees who may be the only ones available in odd hours at night in ICU settings.

6. Lack of proper channels for expression and resolution of patient grievances

7. A general sense of corruption and mistrust in both healthcare justice systems

The immediate enabling factor is the poor security measures at most government hospitals. Unlike other public places with high-footfall, there is hardly any screening or checking of entrants from a security point of view in hospitals. The very fact that a mob of 200 odd could reach right where the doctors were working, without encountering any resistance, speaks volumes about the inadequacy of security provisions. During the course of the current protest, one got to hear repeatedly, that doctors are considered soft targets, who can be attacked without fear of any consequences. It is a debatable point of view, because most attacks on doctors, are carried out in the heat of the moment and not premeditated. Since the crime is one of passion, it is doubtful if the doctor or other medical staff being thought of as a soft target has much to do with such incidents.

Legal protection against violence towards health care providers in India. How does it compare to other countries? 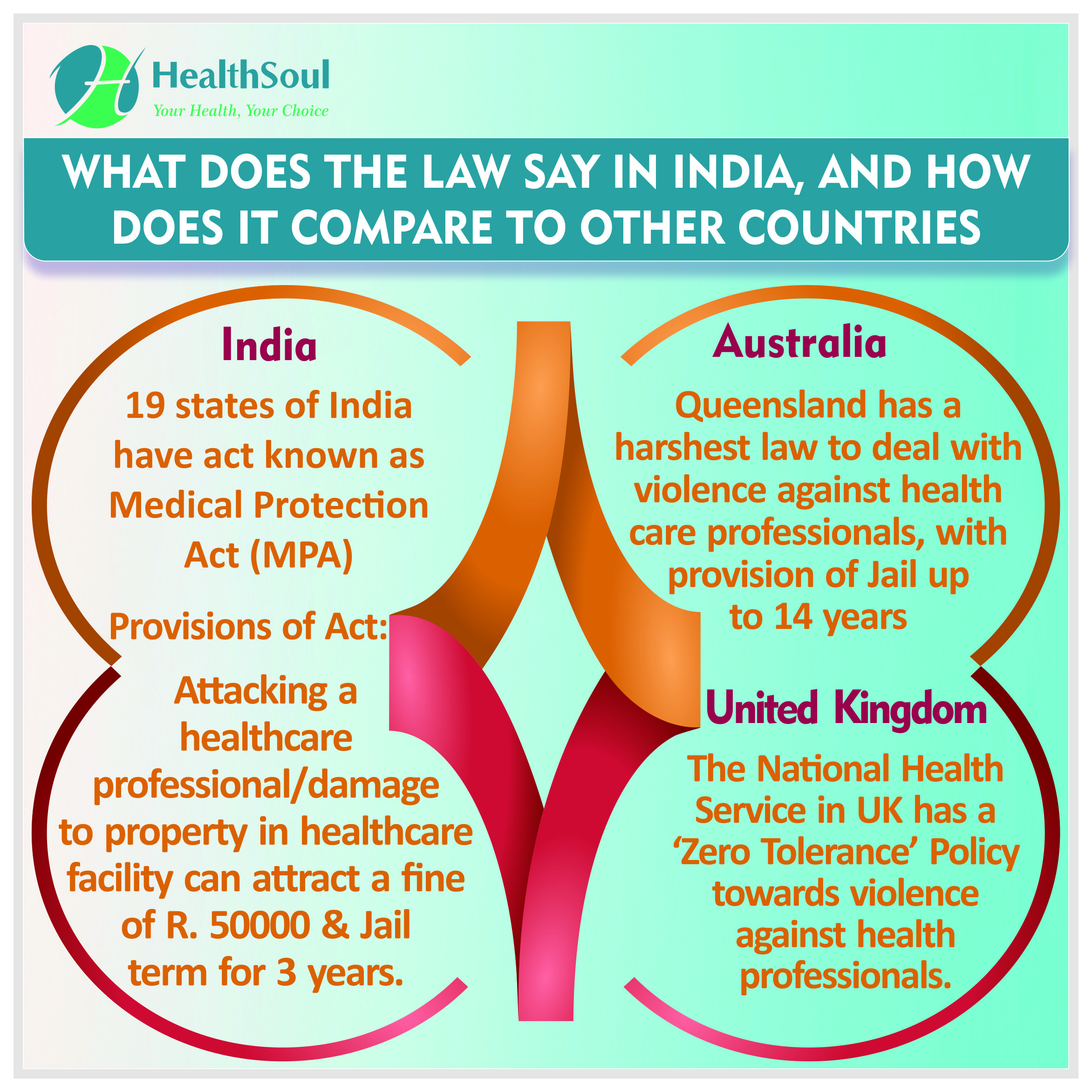 Queensland, Australia has one of the harshest laws to deal with violence against healthcare professionals, with provisions of imprisonment of up to 14 years. The National Health Service in United Kingdom has a ‘Zero Tolerance’ policy towards violence against health professionals. The Assaults on Emergency Workers (Offences) Act provides for imprisonment up to 12 months. Even in the much more federal United States of America, with provisions differ from state to state, of late, there have been calls to move towards more uniform policies to deal with and prevent violence against health-care professionals, an example being the Health Care Workplace Violence Prevention Act tabled in 2018. Many states designate assault on healthcare workers as third-degree felony which can carry a sentence of 5 years in prison, and five years probation.

One of the demands of the protesting doctors (which in principle was accepted by Dr. Harsh Vardhan, the Hon. Union Minister of Health and Family Welfare), is a strong law to deal with perpetrators of violence against health care professionals. It is interesting to note, that there already exists, in as many as 19 states of India (including West Bengal), a Protection Of Medicare Service Persons And Medicare Service Institutions (Prevention Of Violence And Damage To Property) Act, also known as the Medical Protection Act (MPA). As per provisions of the Act, attacking a health-care professional or causing damage to property in a health-care facility can attract a fine of Rs. 50,000 and a jail term of 3 years. Additionally, there are the general provisions of the Indian Penal Code (IPC) dealing with assault, injury and grievous injury (the fracture suffered by Dr. Paribaho would have been one). Protection of patient rights falls under the Consumer Protection Act (COPRA).

There are problems with the implementation of the MPA, as it is as yet not included in the IPC or CrPC (Code of Criminal Procedure) and the law enforcement system in India is ill-famed for its tedious, slow moving pace. Moreover, in many cases (possibly including the latest one in Kolkata), the perpetrators of violence against the health-practitioners are linked to the party in power at the local level or enjoy its patronage. In such cases, the law enforcement machinery can hardly be expected to be unbiased and efficient in bringing to book the perpetrators.

A new law promised by Dr. Harsh Vardhan (Hon. Minister of Health and Family Welfare, Government of India), comes close- with 12 years of imprisonment in such cases, envisaged to be made part of the law. 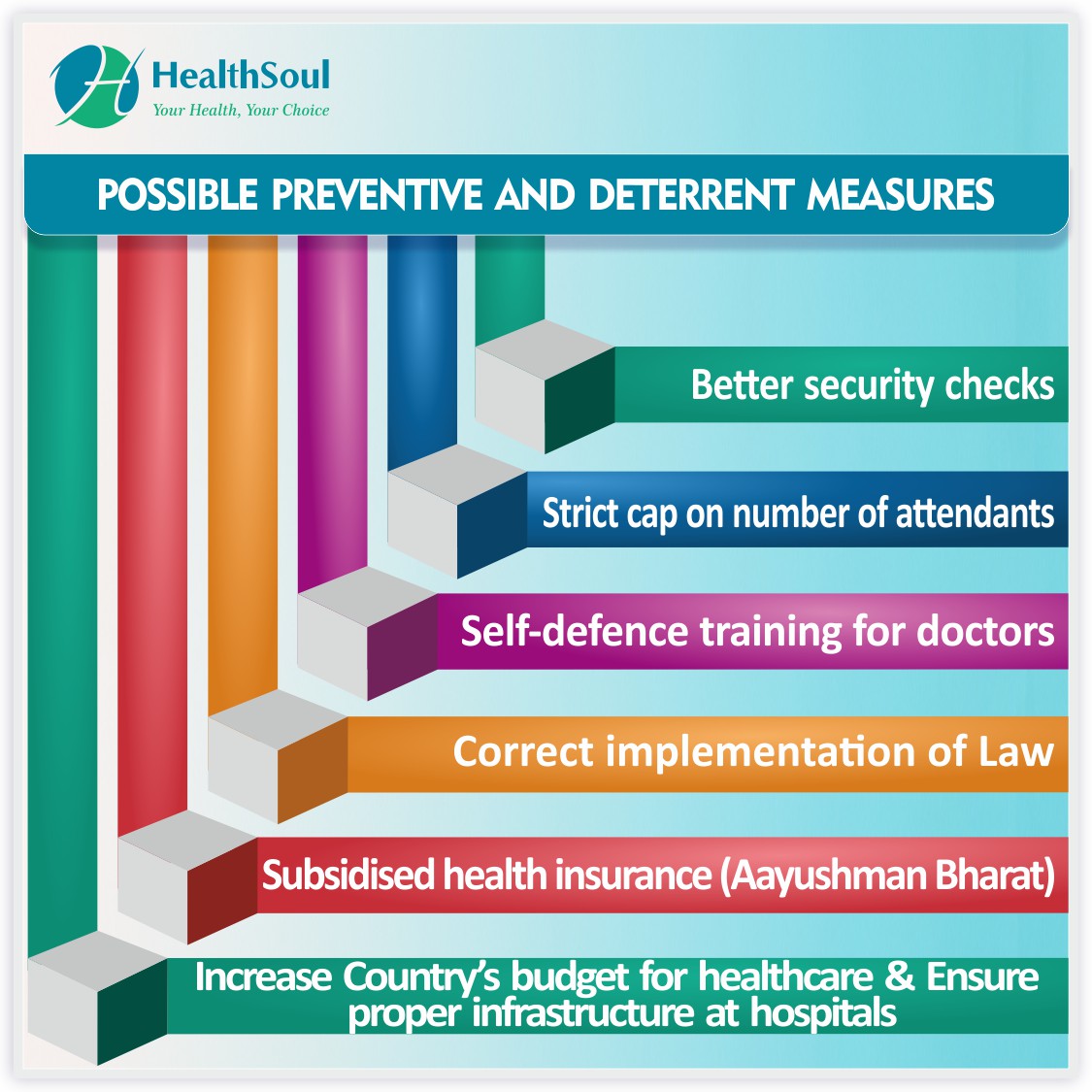 Though, harsh and swift punishments of any offender will deter violence and assault. The issue is complex and needs attention at multiple systematic levels. Providing more resources including security at workplaces to avoid overcrowding may be an immediate step. Training of healthcare professional in identification and de-escalation of conflicts will be next important step. Simulations and mock-drills could be carried out from time to time to check the systems at hand and plug loopholes, if any. The broader and important issue of more resources to health care system, priorities, and checking waste, reduce out of pocket expenses, as well as building trust and respect in the system should follow.

Dr. Dev Desai is a passionate writer and intern at AIIMS, New Delhi.