How Horse chestnut benefits were found?

Balkan Peninsula is the native place of Horse chestnut, which is a rapidly growing tree. This tree also is known as buckeye, as it belongs to a similar family (Hippocastanaceae) like other buckeyes and different from other chestnut trees which usually belong to the Castanea family. It has a belief that the name of this tree is horse chestnut because it has similar brown colored conkers like other chestnuts and in autumn when the leaves are detached and fall then a horseshoe-shaped mark left on the twig.

What are the phytochemicals present in Horse chestnut?

Aescin is the primary phytochemical present in horse chestnut seed extract. Two triterpene saponins α and β are blended and form aescin. Other phytochemicals are quercetin and kaempferol two bioflavonoids, aesculin, coumarins fraxin, and an antioxidant like proanthocyanidin A2. [2] 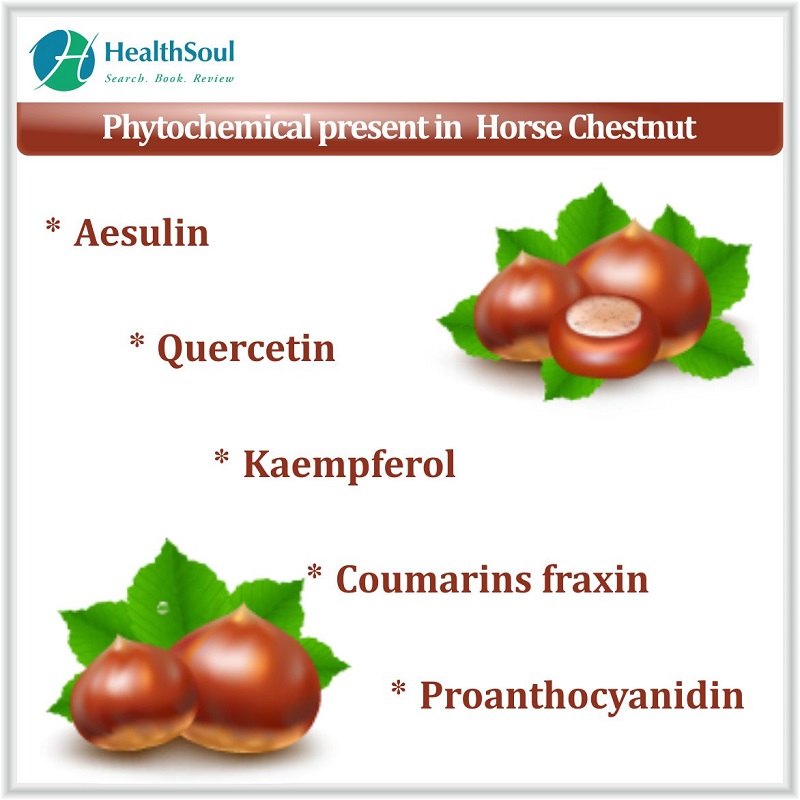 What is the Mode of action of Horse chestnut health benefits?

In 1960, Lorenz and Marek had first discovered that the horse chestnut extract containing aescin has anti-edematous and vasoprotective properties. The β-aescin is the active component in the saponin mixture of two forms of aescin. In different horse chestnut seed extract containing pharmaceutical products formulated for venous insufficiency treatment contain β-aescin as an active ingredient. The mode of action involves in horse chestnut extract include reduction of vascular permeability, which may responsible for venotonic, anti-inflammatory, and anti-edematous effect. [2]

Horse chestnut seed extract has a “sealing effect” at the site of injury. Application of this herbal remedy can induce venous contractility by enhancing calcium ion sensitization, reduction of venous permeability. Thus it provides a venotonic effect. The active phytochemical Aescin responsible for the hypoxic condition of the affected part, reduction of white blood cell adherence, and activation at the site of edema to inhibit edema and protect the blood vessels. The hypoxic condition of the affected site also reduces the ATP level in the endothelium. All together these mechanisms reduce the swelling and edema due to its anti-inflammatory and anti-edematous effect. [2]

What are the different forms of Horse chestnut?

Since 30 years of horse chestnut containing therapeutic dosage forms are available in the different European states. 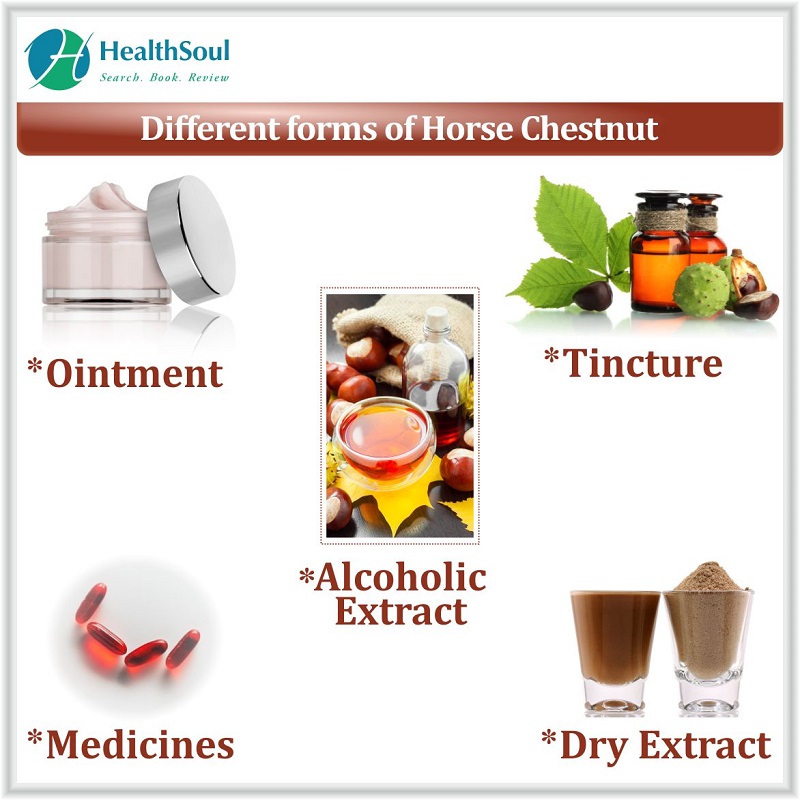 This is the second stage of chronic venous insufficiency. A meta-analysis of five clinical trial results reported that combination therapy of oral and topical administration of Horse chestnut seed extract containing aescin is effective to reduce blue discoloration of the skin, pain, heaviness in the leg, edema. [2]

Postoperative edema is very common after surgical intervention of the limbs. Immediately after the surgery, the skin temperature at the site of surgery is quite high, which indicates pain, swelling and obstruct blood circulation. Two research results finding showed that intravenous administration of Horse chestnut seed extract can reduce the skin temperature at the site of surgical intervention. An oral dose of aescin in combination therapy with parenteral administration accelerates the healing. [2]

Inner ear perfusion disorder occurs due to insufficient blood circulation in the inner ear. the untreated condition can cause loss of hearing. Researchers found that the combination of aescin, the bioactive phytochemical of horse chestnut and troxerutin can improve the condition. Aescin has anti-inflammatory and venotonic properties; whereas, troxerutin has vasoprotective antioxidant properties. These therapeutic benefits combinely improve the hearing ability of the affected patients. [2] 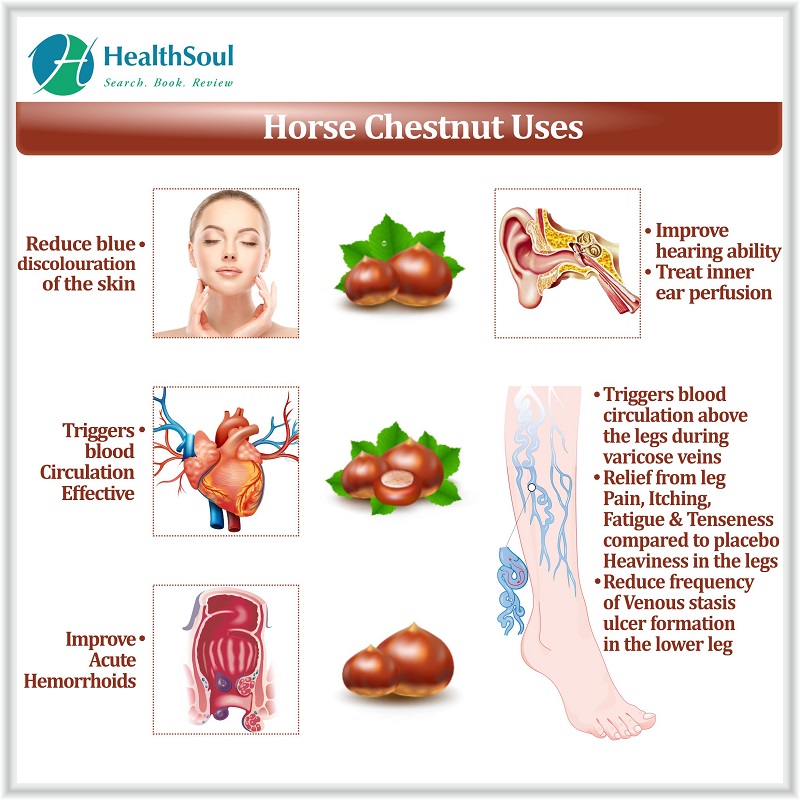 The adverse effects of horse chestnut are mild. The reported side effects are a headache, dizziness, itching, and gastrointestinal symptoms. Gastrointestinal symptoms usually occur with a higher dose. Aescin application topically may cause allergic reactions in some skin sensitive patients. However, it is a rare incidence. Sensitive skin may cause redness, itching at the site of application. [2] 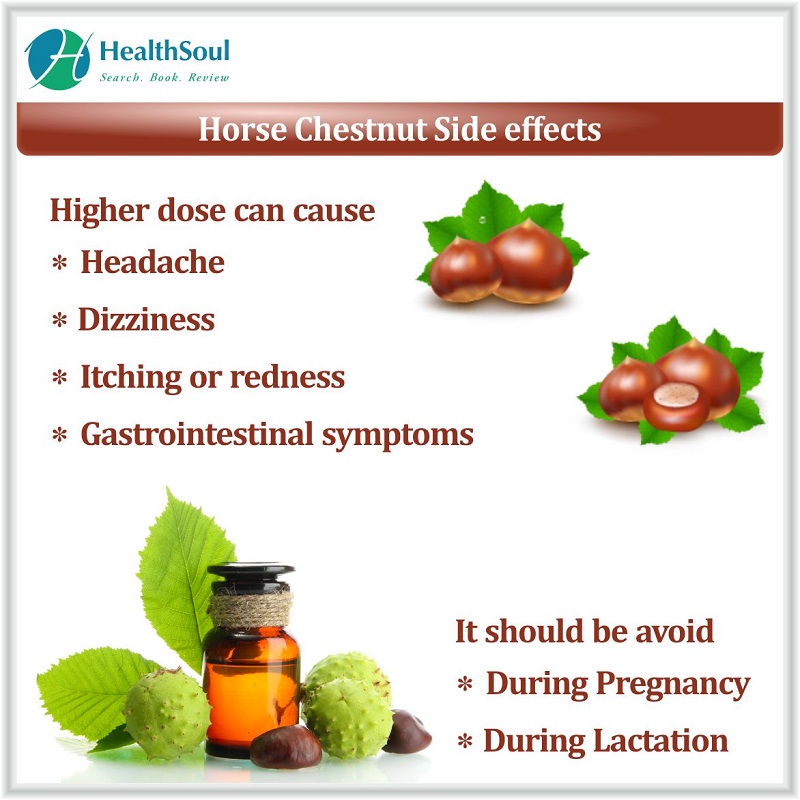 When should I avoid horse chestnut?

Horse chestnut is not recommended during pregnancy and lactation. [2]