How Hemp Seed benefits were found?

The source of hemp seed is a marijuana plant. Several countries like Australia, Canada, Great Britain, Austria, China, France, and Spain legally cultivate hemp seeds.  Governments of these countries have accepted the difference between hemp and marijuana and the cultivation of marijuana in these countries is penalized. However, the cultivation of hemp seed is not legalized in the United States, as the government believes that the legalization of hemp may lead to the legalization of marijuana. [1]

Hemp is a type of Cannabis Sativa L. which has a low concentration( less than 0.3%) of Δ9-Tetrahydrocannabinol (THC).  Hemp is different from marijuana. marijuana contains a high concentration (1-20%) of the psychoactive compound THC. [1]

What are the phytochemicals present in Hemp Seed?

Hemp is an amazing byproduct of marijuana source, which contains negligible or negative measurable quantity of THC. The total protein content of hemp seed is similar as soybean. Hemp is not only an abundant source of protein but it also contains balanced omega-3 and omega-6 fatty acids (polyunsaturated fatty acids), and a higher content of natural fibers. [2] The unique combination of protein, polyunsaturated fatty acids, and fibers make Hemp protein, a superior protein source than others.  Agriculture and Agri-food Canada claim that the Hemp seeds contain multiple nutritional benefits. [3]

All the trace minerals like sodium, potassium, calcium, phosphorus, magnesium, sulfur, iron, and zinc are present along with a sufficient amount of vitamin E. There are many research studies conducted that found hemp seed oil has several health benefits and the nutritional content of the hemp seed oil has a specific role in it. For example, all the essential amino acids along with a sufficient quantity of arginine are present in hempseed oil5. Therefore, the hemp seed oil is considered as potentially important vegetable oil. [1] 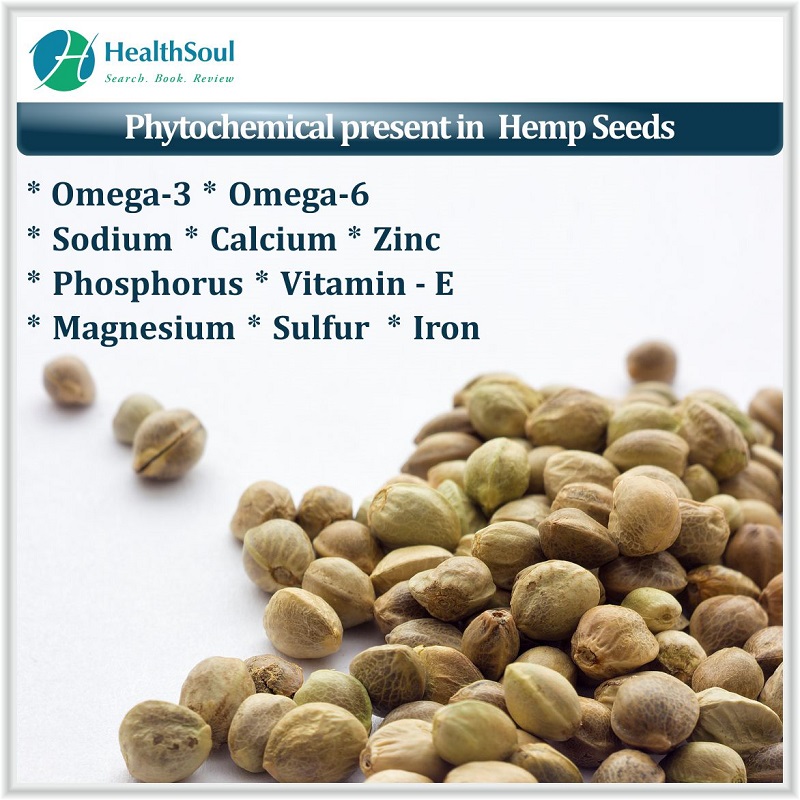 What is the Mode of action of Hemp seed health benefits?

The significant amount of protein in combination with essential amino acids plays an important role in the overall growth of the body, in repairing of body tissues, in the development and maintaining the health of protein-made structures like a nail, hair, and skin. It improves fat metabolism and maintains fat distribution properly. [4] Apart from this, protein deficiency and related health problems like fatigue, weight gain, mood swing etc. can be conquered by taking hemp protein. [5]

Journal of Agricultural and Food Chemistry published a study result in 2010, which reported that the amino acids present in Hemp protein are very readily available in the circulating blood due to protein digestibility-corrected amino acid score is equivalent or superior to legumes or nuts.

Studies found that high content of arginine in hempseed oil is responsible for the synthesis of nitric oxide (NO). Moreover, recent studies also found that arginine can improve cardiovascular functioning as it contributes to the regulation of hemostasis, breakdown of clotting in the blood vessels, which improves blood circulation, controlling vascular tone, and vascular smooth muscle cell proliferation. All these mechanisms support blood pressure hemostasis and reduce the risk of cardiovascular disease. [1]

What are the different forms of Hemp seed?

There are different bakery products are manufactured by using hemp flour obtained from hemp seeds.

Hemp protein-containing beverages available in the market as a health drink.

Some dairy and infant formulations are also available by adding hemp protein in raw milk.  [6] 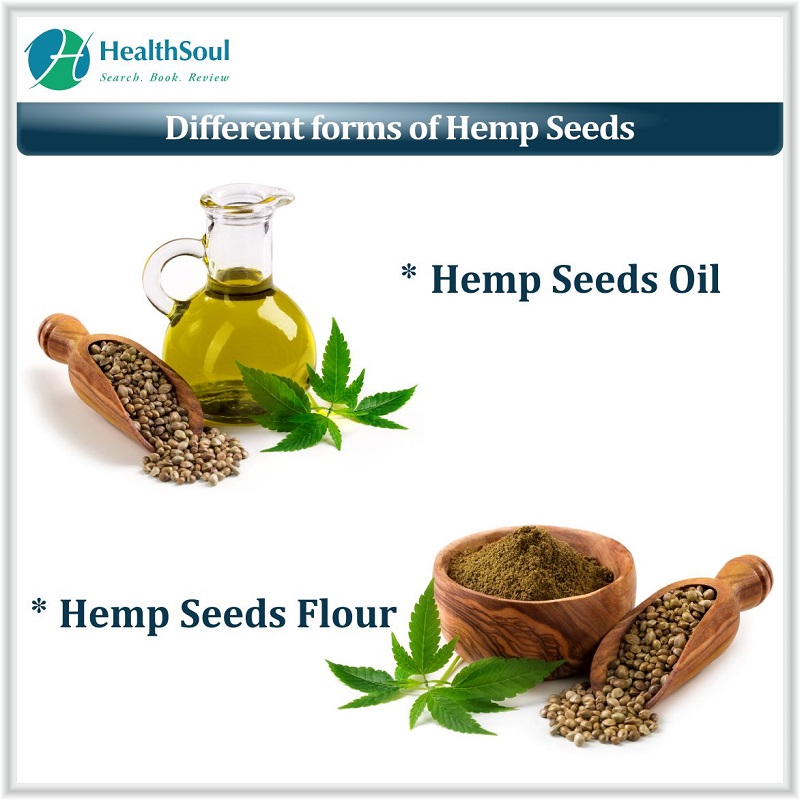 The animal study provides evidence that hempseed consumption increase the plasma concentration of omega-6 and omega-3 fatty acids and that may assist in the prevention of plaque formation by reduction of platelet coagulation.  In addition, stearidonic acid converts to  EPA and DHA through metabolic reaction and thus provides a protective effect in cardiac health. [1]

The risk of coronary heart disease, hypertension, and atherosclerosis can be reduced by increasing intake of omega-6 fatty acid linoleic acid, and as hempseed contains a large amount of LA, therefore researchers expect supplementation can help to reduce all these cardiac complications.

All the above-mentioned benefits of hempseed extracted oil have established it as potentially important vegetable oil. [1]

Food craving is one of the crucial factors in the enhancement of blood sugar level. The higher fiber content of Hemp protein gives potential benefit to delaying the food craving by delaying the gastric emptying timing. This benefit makes hemp protein as a viable meal replacer. But the risk of energy drop is limited, as 100 grams of Hemp seeds provide 525 kcal of energy, which is gained from a sufficient amount of fatty acids and protein content. [2]

Common skin problems such as dryness of skin, and severe itching, which are also symptoms of atopic dermatitis, can be improved by dietary intake of hempseed oil. Atopic dermatitis is a skin disease characterized by dry and scaly patches appearance on the skin along with itching as a most bothersome symptom. Research evidence supports that dietary hempseed oil provides significant relief from clinical symptoms of atopic dermatitis by altering plasma fatty acid level, specifically, sufficient supply of PUFAs has a great role.  [9] Another placebo-controlled human study reported that oral intake of hemp seed oil can able to reduce the water loss from the inner layer of skin. This result indicates that hempseed oil may prevent dryness and itching symptoms of most of the skin disorders.[2]

Hemp contains approximately 26.3%  of non-digestible fibers [2], which act as a bulk laxative that absorbs moisture content from the gut wall and swells up and form soft and bulky stool.[12] Therefore, those suffering from chronic constipation can get help by consuming Hemp protein. Moreover, Hemp is from natural plant base source, so the risk of dependency is negligible, as like other synthetic laxative drugs.

Calcineurin is an important regulator of brain functioning [9] and a laboratory study found that Hemp seed oil can activate calcineurin. In addition, an animal study showed that a sufficient oral dose of hemp seeds for a certain period can help to improve memory. All this evidence proves that Hemp Protein can improve memory and learning ability. [2]

Hemp protein is a good source of energy supplier, which helps to keep on physical endurance for a prolonged period.  In addition, Hemp protein in the diet improves muscular strength and provides the physical stamina to do hard work. [12]

It is considered that 3:1 is the optimal ratio of omega-6 and omega-3 fatty acids present in Hemp seed oil is effective to provide anti-cancer activity along with the resistance against platelet aggregation. Already research evidence reported that omega-3 fatty acids can inhibit cancer and tumor development.

Hempseed oil contains approximately 57% linoleic (LA) and 19% linolenic (LNA) acids, and this proper amount of linoleic and linolenic acids  (3:1 ratio) controls the physiological synthesis of their metabolites such as prostanoids and leukotriene, primary inflammatory factors. This helps to relieve arthritis.  The anti-inflammatory property of Hempseed is also useful against autoimmune disorders. [12]

Different phytonutrients such as cannabidiol, beta-sitosterol, beta-caryophyllene, myrcene, alpha/ gamma-tocopherol, and methyl salicylate are present in the Hemp oil. They possess numerous health benefits. Most importantly, cannabidiol & beta-sitosterol have an antimicrobial property and alpha & gamma-tocopherol are potent antioxidant and have the ability to reduce the free radical load from the body, which is one of the primary reason for multiple chronic disorders such as cardiac heart disease, diabetes, cancer, etc. [12] 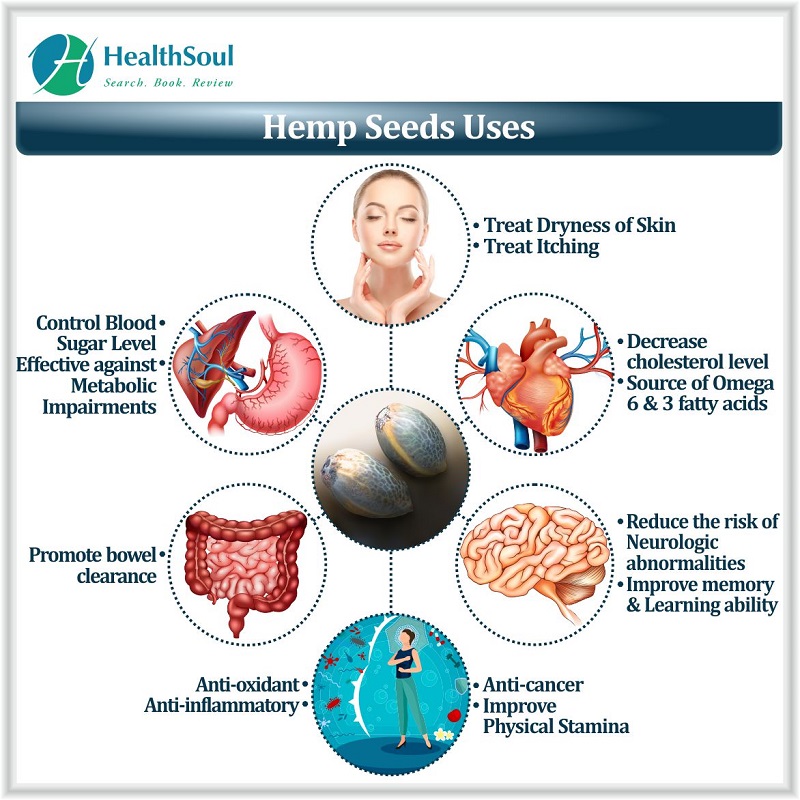 Michigan Medicine report mentioned that hemp seeds is well tolerated product of cannabis. People usually do not experience negative side effects. This report also declared that hempseed does not interact with other medications.  But a large dose of hempseed intake can cause anti-platelet activity due to higher fiber content. Therefore, avoid to intake with blood-thinning medications. A large dose of hemp seed can also cause diarrhea. Very rarely some people may experience minor psychological disorders due to little amount of THC. 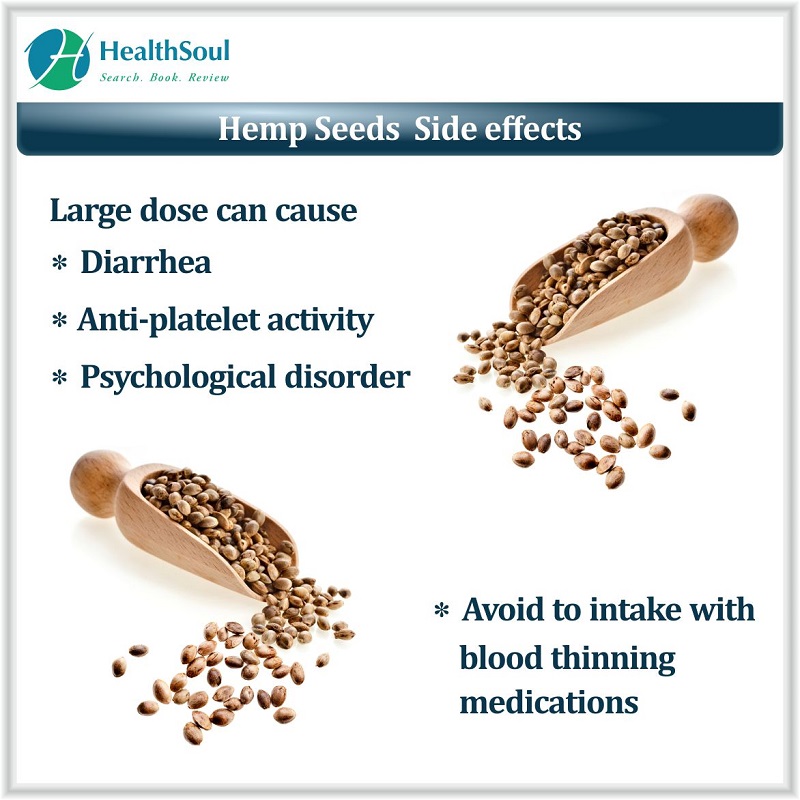 When should I avoid hemp seed?