With a population of just under 68 million in 2015, Thailand ranks 20th in the world by population and 52nd by total area. The official language of Thailand is Thai. The currency is the Thai baht.

The Ministry of Public Health is in charge of Thailand’s 1,000 public hospitals and nearly 10,000 health stations. Although public hospitals are often over-crowded, treatment is free (except on Saturdays) for citizens with a Universal Coverage Health card. Most of the doctors are specialists, who work in different hospitals and private clinics, but some hospitals do have family doctors or general practitioners.

Some of the 316 registered private hospitals, regulated by the Medical Registration Division, are participants in the three healthcare programs, but most are funded by patient payments and private insurance. Thailand’s private medical sector is one of the leading medical tourism destinations in Asia. Emergency transport services are not well developed. Most rescues are performed by volunteer groups or passers-by, making it difficult to get to a hospital, through traffic, quickly. 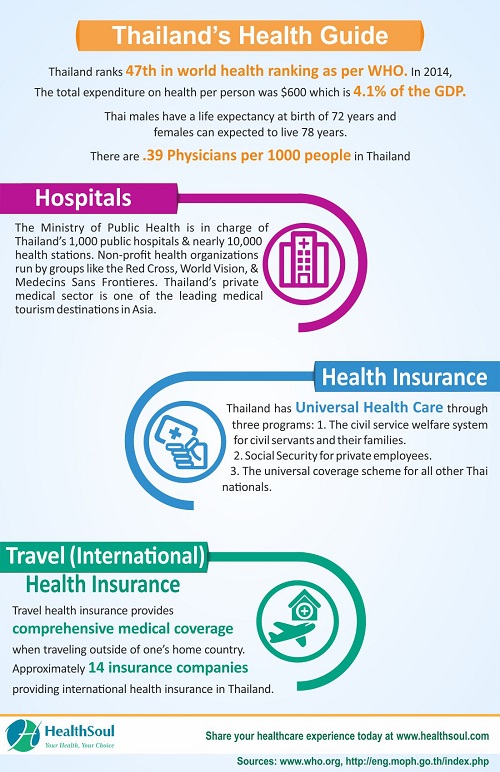 The civil service welfare system for civil servants and their families (about 7% of population).

Social Security for private employees (about 15% of population).

The universal coverage scheme for all other Thai nationals (about 75% of population). Covered benefits include medication, outpatient care, hospitalization, disease prevention, radiotherapy, surgery, and critical care.

About 10% of Thai citizens carry private health insurance, available through about 35 companies.