There are roughly 2,200 hospitals in the United Kingdom; the majority are public and funded mostly by general tax dollars. The entire health system is managed by a public body known as National Health Service (NHS) England. Budgets are then established for local authorities who are required to improve services and reduce disparities. 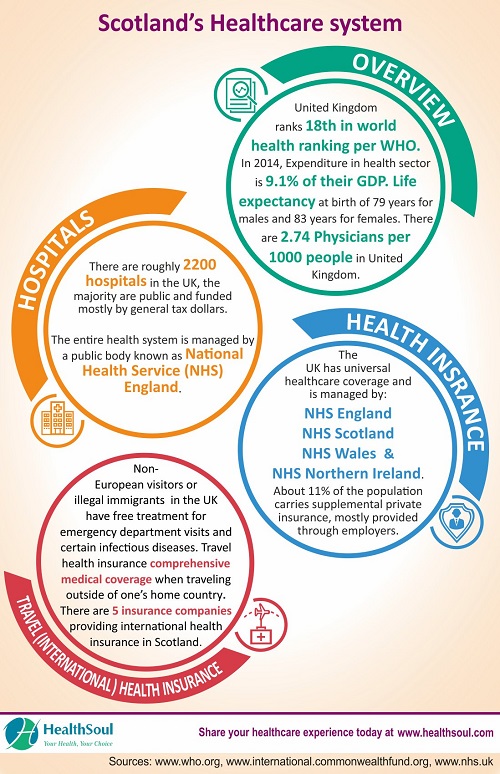 The UK has universal healthcare coverage and is managed by NHS England, NHS Scotland, NHS Wales and NHS Northern Ireland. The covered services are not precisely defined but include a broad range of preventive and physician services, hospital care, drugs, some dental and eye care, mental health, rehabilitation and home health care. The specifics are generally left up to the local authorities, who are charged with making “rational, evidence-based decisions.” Studies have shown wide variation in decision making and access to some services.

Some services are subject to a co-payment. These include outpatient prescription drugs ($12) (some people are excluded from co-payment), dentistry services (up to $314). Other out-of-pocket costs are for products like glasses and other medical appliances or equipment. People who need large amounts of prescription drugs can buy prepayment certificates for either a 3 month or 12-month supply for a one-time payment, $41 or $147 respectively, no matter how many refills they need.

About 11% of the population carries supplemental private insurance, mostly provided through employers. These policies provide for faster and more convenient care, but many services are excluded. There are four major carriers of private health insurance, accounting for nearly 90% of the policies. Small providers account for the rest.

Non-European visitors or illegal immigrants in the UK have free treatment for emergency department visits and certain infectious diseases.