Spirulina is a type of blue-green algae. The name is derived from a cyanobacterium with filamentous, microscopic structures. The filamentous structure is spiral or helical nature. Since Aztec civilization, Spirulina has used as food and thus it has a long history of human-edible. Spirulina is an aquatic product and obtained from an oxygenic photosynthetic bacterium known as the of Arthrospira platensis. Dried biomass of this bacterium is referred to as Spirulina, which is found both in fresh and marine waters.

The cultivation of Spirulina is not involved in complicated agriculture steps. However, the alkaline lakes with the highest pH are the favorable condition to flourish the Spirulina. This blue-green alga is cultivated in large ponds under controlled conditions. Greece (Nigrita, Serres), Spain, Japan, India, and the United States are some few places in this world have the ideal sunny climate require for Spirulina production.

Spirulina is a rich source of protein and vitamin and used as a dietary supplement for human use. This natural substance provides many health benefits without any significant side-effects. Almost 70% of protein present in Spirulina, along with this Spirulina contains many vitamins, such as B12,  β-carotenes (provitamin A), and minerals, especially iron. The phytochemicals present in Spirulina include tocopherols, phenolic acids, and γ-linolenic acid. 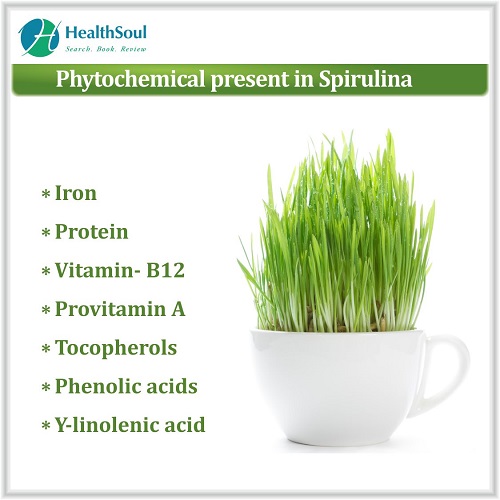 Mechanism of action of Spirulina

The anti-inflammatory effect of this alga is obtained due to the following pathways:

Nowadays, Spirulina is used as a dietary supplement and different dosage forms including tablets, health drinks are available in health food stores. These microalgae containing dietary supplements are used by the consumers for more than 10 years without any noteworthy side effect.

There are a large variety of blue-green algae species, which commonly referred to as “spirulina”. Aphanizomenon flos-aquae, Spirulina platensis, and/or Spirulina maxima are the most common active ingredients of spirulina containing supplements.

The different Spirulina containing dosage forms available in the market include

Spirulina Tablets and Spirulina Capsules are also available in the market for those who do not prefer to use powder form. Both tablet and capsule provide a measured dose of supplement and effective to provide dietary benefits. 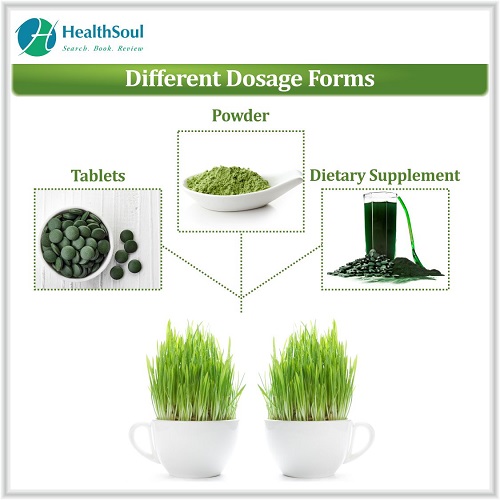 Spirulina has an inhibitory effect on viral replication and protected against many viral infections including measles, mumps, Herpes simplex type I, influenza A virus, human cytomegalovirus, and HIV-1 (human immunodeficiency virus-1 virus).

In dyslipidemia, the LDL: HDL ratio is significantly higher due to an increase in the level of Low-density lipoprotein (LDL). A small scale human trial result reported that Spirulina has LDL lowering effect with eight weeks of the treatment plan. Spirulina also significantly reduces triglycerides level. Thus, Spirulina is effective to control overall blood cholesterol level. A small scale clinical trial conducted in the diabetic patient with increased LDL: HDL showed that marked reduction of this ratio.

Cardiac diseases like atherosclerosis, ischemic heart disease have a direct relation with hyperlipidemia.  Spirulina supplementation can reduce these cardiac problems by significantly blood cholesterol, triglycerides, and LDL cholesterol-lowering effect, along with an increasing level of HDL cholesterol.

The anti-inflammatory property of Spirulina is beneficial for treating arthritis, and colitis.

Both immunomodulatory property and potent antioxidant capacity of Spirulina have a cancer-preventive effect. Many cancer trials conducted to evaluate the anticancer property of Spirulina. Most of these study results reported Spirulina supplementation for one year treatment period able to provide complete regression of leukoplakia.

Cognitive impairment is common with obese patients. Spirulina in combination with glycyrrhizin provides benefits against obesity-induced cognitive impairment by reducing the acetylcholinesterase (AChE) levels in the hippocampal region. 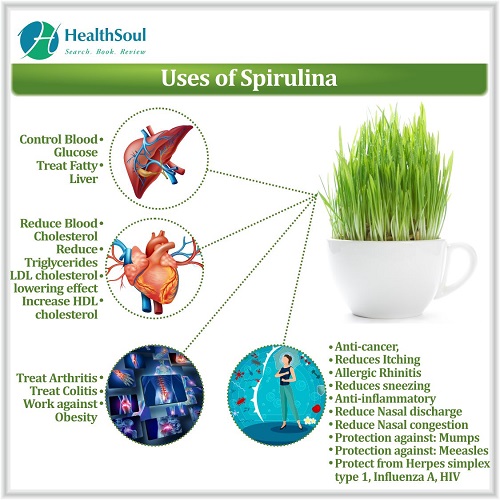 Side Effects and Precautionary Measure

Fresh and dried adulteration free Spirulina is safe and does not cause any side effects. The safety profile of Spirulina is evaluated through several toxicological studies and have evidentially proven Spirulina‘s safety. The US Food and Drug Administration has enlisted Spirulina under the category of Generally Recognized as Safe.

An animal research study conducted to evaluate the safety profile of the Spirulina. This research finding supported that this functional food has no identifiable adverse effects on reproductive performance, embryo and fetus development and growth. It neither causes any teratogenic effect.

The mercury level in Spirulina is much lower than the guidelines for daily intake recommended by WHO guidelines.

However, the food and dietary department identified some of the cyanobacterial species can produce cyanotoxin. Therefore, the experts recommended the quality evaluation of Spirulina is very important before consuming it as a dietary supplement. Consumption of certain cyanotoxins like anatoxin-a can cause acute neurotoxicity.

But experts suggested that the excessive intake of Spirulina may increase the risk of hepatotoxicity.