Simarouba amara is a plant belongs to Simaroubaceae family. In this family, almost 170 different species of plants which have 32 diverse genera are distributed all over the world. Brazil is the native place of Simarouba amara. However, Simarouba spices are also found in America, Africa, Madagascar, Malaysia (Asia) and Australia. Simarouba amara has many local names, such as pau-paraíba, simaruba, marupá and praíba. Simarouba amara comes under the tree category. The height of this tree is 40 m and diameter is 0.5 to 0.9 m.

A typical bitter taste of this herb may present due to certain phytochemicals, which are responsible for medicinal properties. However, the chemical properties of different plants which belong to the Simaroubaceae family differ from each other. One of the phytochemical quassinoide is present in Simarouba amara had identified in 1961 and since then many research studies have performed to establish the medicinal benefits of this herb.

In 1926, the Brazilian Pharmacopoeia had enlisted the name of Simarouba amara in its first volume. In 2012, International Journal of Pharmaceutical Sciences and Research published article reported the ‘Acute and Subacute Toxicities of The Aqueous extract of Simarouba Amara Aublet Stem Bark’ result and depending upon this study finding the new data has entered in the monograph. 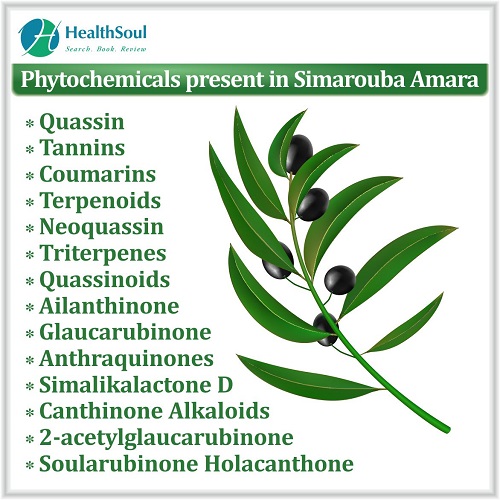 Mechanism of action of Simarouba Amara

The stem bark of Simarouba amara contains quassinoids, alkaloids, and triterpenes. Recently six new triterpenoids and two other constituents such as 3-oxatirucalla-7,24-dien-23-ol and niloticin have been identified by herbal researchers. Tannins and alkaloids present in this herbal constituent have potent antioxidant properties.

There are two dosage forms of Simarouba Amara are frequently used to evaluate the efficacy of this herbal remedy against different diseases. These are as follows:

In traditional practice, the bark of Simarouba amara stem is collected and a decoction of this herbal part is recommended to treat malaria. However, Pharmacological researchers reported the fruit of Simarouba amara has anti-malarial property. In another in vitro trial result reported that Simarouba amara fruit extract is effective against Plasmodium falciparum and Plasmodium berghei in mice. Researchers identified four active quassinoids, such as ailanthinone, 2′-acetylglaucarubinone, glaucarubinone, and holacanthone, which has anti-malarial property.

The decoction prepared from Simarouba amara stem bark is recommended to treat inflammatory diseases due to its anti-inflammatory property.

Simarouba amara bark aqueous extract is effective against both Gram-positive and Gram-negative bacteria. The antibacterial effect of this herbal remedy has an inhibitory effect against multiple bacterial strains, including Escherichia coli, Klebsiella pneumoniae, Pseudomonas aeruginosa, Staphylococcus aureus, and Salmonella typhi. The bactericidal activity of Simarouba amara has found against Shigella flexineri and Salmonella typhosa.

The root bark of Simarouba amara has a moisturizing property which is effective to maintain the moisture balance in human skin.

The liver is a sensitive organ, which may damage in exposure to chemical toxicity. Simarouba amara bark extract has potent hepatoprotective activity and helps to maintain liver health.

An animal research study showed that Simarouba amara bark aqueous extract with a dose of 100 mg/kg of body weight is effective to provide hepatoprotective activities. 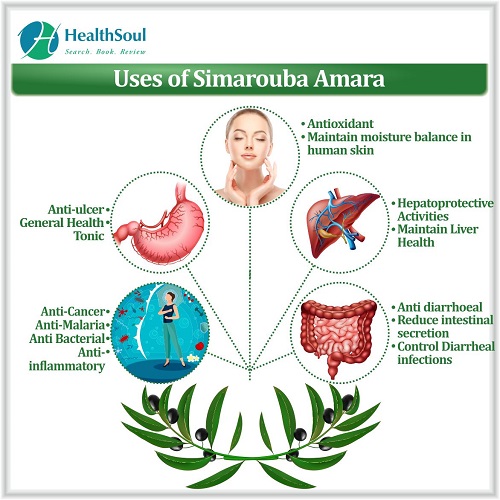 Side Effects and Precautionary Measures

The acute and chronic toxicity study showed that mild to moderate dose of Simarouba amara for short treatment period does not cause any toxic effect. However, long-term therapy or a higher dose can cause an anorectic condition. In such a condition, the appetite of the affected individual has significantly reduced and subsequently reduces body weight. Long term treatment with an increased dose of Simarouba amara with a higher dose of tannins can cause intestinal abnormality by altering the intestinal mucosa. It also changes the liver functioning by increasing the levels of alkaline phosphatase and total bilirubin.

Long term treatment is recommended for female as it alters the estrogen hormonal level. Patients who have a higher risk of gout should avoid this herbal treatment as it may enhance the xanthine oxidase activity and accumulate uric acid. 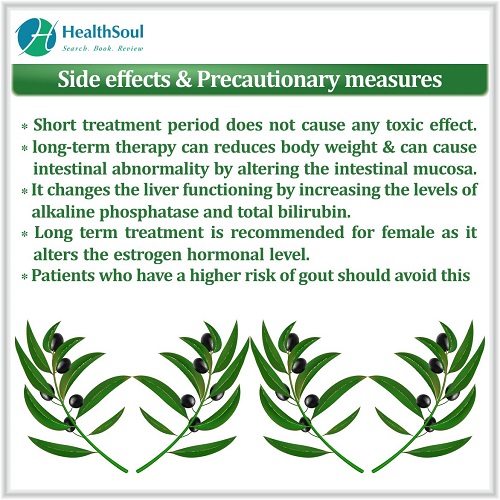