Hydrangea macrophylla and Hydrangea maritima are two botanic varieties of Hydrangea species. These have many local names depending upon the region of its origin. Japan, Korea, Malaysia, China Spain are some native places of Hydrangea. This plant is widely found as garden cultivation. This plant is also flourishing in the high altitude areas of the Philippines including in Baguio city.

Hydrangea is a shrub with a height of 1.5 to 2 meters. Light green colored leaves of this shrub are oblong-ovate, acuminate, petioled, arranged in opposite direction with serrate margins. Blue, white and pink colored flowers of this shrub are cluster shaped, large size with 12 centimeters diameter having terminal cymes.

The young leaves of these plant have a very sweet smell. This can be easily felt when we rub the leaves on our palm and take the smell. Buddhists are used this plant leaves in herbal tea preparation and believed that the sweet flavor of this tea is ‘tea of heaven’. The dried powdered form of older leaves of this plant used as a flavoring agent in food preparation. The cooked preparation of young shoots and leaves also used for edible purposes. In Native American traditional medicine, hydrangea root was widely used to treat many diseases.

Mechanism of action of Hydrangea

Flavonoid and phenolic contents of Hydrangea responsible for antioxidant properties by preventing the generation of reactive oxygen species. Hydrangea containing herbal products inhibit the release of Lactate Dehydrogenase from the liver cell and prevents the hepatic cytotoxicity. Hydrangea as a herbal remedy can control serum biochemical parameters.

There is an animal research study reported that treatment with Hydrangea can control the dilation of the portal vein in the study subject affected by liver damage. This treatment also helps to regain weight after exposure to arsenic toxicity. A marked reduction of liver peroxidation is significantly observed due to the antioxidant property of Hydrangea. Oxidative damage often leads to apoptotic cell death. The antioxidant property of Hydrangea can regulate apoptotic cell death by regulating anti-apoptotic signaling pathways.

Roots, leaves, and flowers of Hydrangea are traditionally used as an antitussive, diuretic, and anti-malarial purposes. The alkaloid constituent present in Hydrangea has more potent anti-malarial property than quinine.

The root of Hydrangea has much medicinal application for example. It can be used as a bladder infection, inflammation reduction, autoimmune disease prevention, etc.

The increased flow of urine by treating with Hydrangea preparation helps to eradicate kidney stone. Moreover, this herb able to treat calcifications. Treatment with Hydrangea also dissolves gallbladder stones due to antilithic property.

Laboratory-based research findings confirmed that strong antioxidant property of Hydrangea has the hepato-protective potency. The investigator of this research study concluded that Hydrangea treatment can restore oxidative damage by preventing the free radical generation and reducing mitochondrial-dependent apoptosis.

The protozoan parasite Plasmodium is a causative organism of malaria. Hydrangea can fight against parasitic infections and treats malaria.

Other health benefits and medicinal applications of Hydrangea are cystitis preventive effects in women. It acts as an antiseptic. 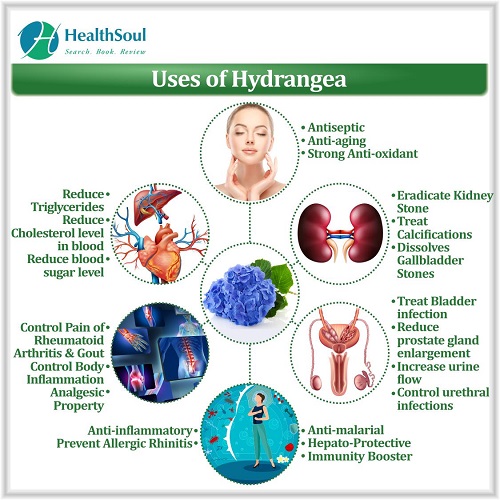 Hydrangea containing different dosage forms are available in herbal stores. Liquid extracts and tincture preparations are made up of Hydrangea roots. Powder and capsule forms of Hydrangea supplement is also available in the herbal drug stores. The patient should discuss with their general physician and take the dose recommendation from expert herbalist to incorporate Hydrangea containing products as a health regimen.

Apart from these, fermented leaves of Hydrangea mercophylla leaves, which is also known as Hydrangea dulcis folium used for many animal research studies. 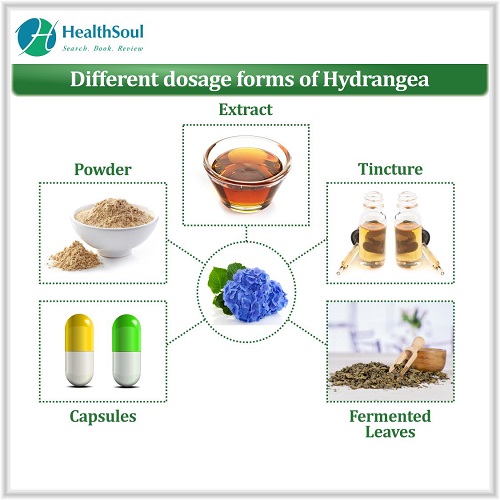 Side Effects and Precautionary Measure

There are multiple medicinal properties of Hydrangea have minimal side effects, which include nausea, vomiting, diarrhea, chest tightness, etc. Pregnant and lactating mother should use Hydrangea containing herbal products because of lack of safety profile. It is also not suggested that to take Hydrangea product as a long term therapy without consultation with a physician. One should not use Hydrangea products continuously for more than 2 to 3 days. Experts also recommended the maximum dose of Hydrangea root product is 2gm per day. The moderate application of any herbal product is safer than the higher dosage. 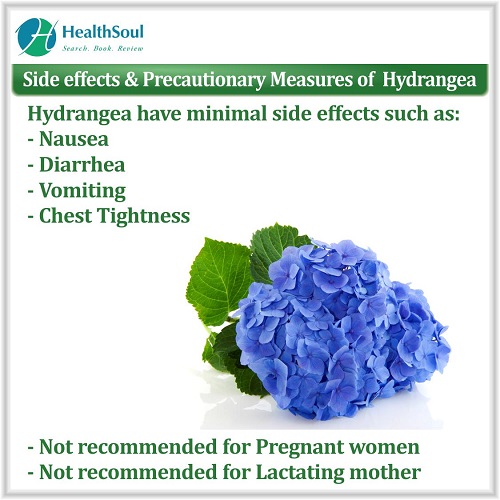