Foods to Avoid in Pregnancy

While pregnancy is an exciting time for moms to be, it can also come with a lot of questions, and knowing which foods you can eat and which foods you should avoid is often something many women find themselves googling before every bite they take.

The good news is that there aren’t too many foods you have to completely avoid in pregnancy, but you do want to be informed about which ones are safe and which ones are not so you can make an informed choice when it comes to your pregnancy diet.

Let’s take a look at the foods you will want to avoid in pregnancy.

Foods to Avoid in Pregnancy

#1 High Mercury Fish: One of the most common topics of conversation when it comes to pregnancy nutrition has to do with the consumption of fish. You will want to avoid consuming high mercury fish while pregnant as this heavy metal can be passed to baby during pregnancy. Avoid fish like tuna, swordfish, king mackerel, and shark.

#2 Large Amounts of Caffeine: Your morning cup of coffee is generally considered ok when pregnant, but it’s large amounts of caffeine you will want to watch out for. You will want to limit your intake to 200 milligrams of caffeine per day which is equal to about a 12-ounce cup of coffee (1) Keep in mind that caffeine is also found in many other beverages and chocolate, so count these into your daily caffeine intake each day.

#3 Raw Animal Products: Raw meat, fish, sushi, cheese, these are all things you will want to avoid when pregnant. There’s a larger chance of food poisoning or salmonella with these foods, so be sure to cook everything you consume during pregnancy, and avoid raw cheese and raw sprouts while pregnant.

#4 Herbal Products: Unfortunately, there just isn’t enough information out there yet to determine the safety of many herbs during pregnancy which is why it is better to stay on the safe side and avoid herbal products during pregnancy.

#5 Deli Meat: For many moms to be, giving up their favorite sandwich during pregnancy is a bummer, but it’s not worth the risk. Avoid deli meat to help reduce the risk of coming in contact with listeria.

#6 Unpasteurized Milk or Juice: Unpasteurized milk, juice, or apple cider should also be avoided as there’s a greater chance of bacteria exposure with these beverages.

#7 Soft Cheeses: Soft cheeses like feta, brie, or any cheese made with unpasteurized milk should also be avoided due to the risk of E. coli and listeria. 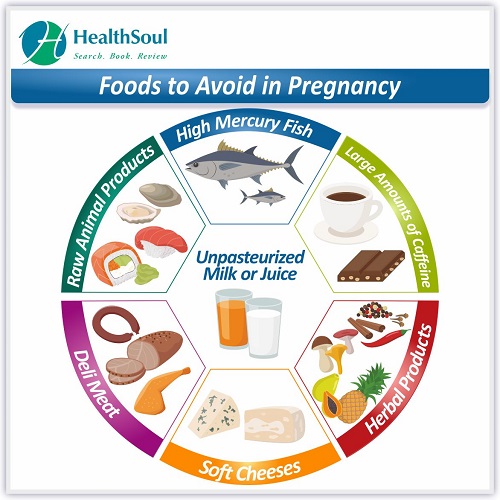 While it may seem like a fairly lengthy list, there are so many other delicious food choices you can enjoy during pregnancy, and remember that eliminating these foods is a temporary step to protect both you and baby! After pregnancy, you can go back to enjoying these foods, if you choose. So, try to focus on what you can eat instead of dwelling on what you can’t. This positive attitude will make avoiding these foods so much easier to do.

Rebecca Jacobs N.C is a Certified Holistic Nutrition Consultant, specializing in digestive and women’s health. She doesn’t believe in dieting but rather making lifestyle changes, and believes that healthy eating must be delicious. Rebecca is also a recipe developer and creates healthier alternatives to traditionally unhealthy foods.