Epidemic of Firearm Deaths in US Children

According to a study published in Pediatrics in January 2019, there has been a steady increase of firearm-related deaths among children since 2004. After many years of decline, child mortality rates due to firearms is on the rise. Almost 1,300 deaths of children 17 or younger are attributed to firearms each year. The study points to a possible link to handgun ownership in the homes of families who lost children to firearm-related injuries.

The study looked at data on firearm ownership and child mortality rates over the last few decades. While firearm ownership declined since 1976, the child mortality rate did not decline proportionately. The researched delved into why there seems to be an epidemic of firearm deaths in U.S. children, even though there is a smaller percentage of families with firearms in the home. One of the factors that seemed to correlate was the change in the type of firearms owned.

In the study, the focus was on white, non-Hispanic families, although data were collected for all ethnic groups. According to their research, there was a steady, slight decrease in gun ownership from 1976 to 2016. However, there was a dramatic change in the type of firearms owned. In 1976, 25% of these families with children owned a rifle or shotgun and 24% owned a handgun. Forty years later, only 12% owned a shotgun or rifle while 32% owned a handgun. Overall, this pointed to the fact that 72% of families with firearms in the home own a handgun.

These firearm statistics were gauged against the statistics for children mortality rates during the same time periods. Firearms are the third leading cause of injury deaths in U.S. children, with an increase in mortality rates even with a decline in overall firearm ownership. The conclusion of the researchers was the change in most common firearm ownership types from rifles/shotguns to handguns could explain this epidemic of child firearm mortality, especially with children ages 1-5. The researchers proposed since handguns are more likely to be easier to use and left loaded, they could be more dangerous in households with children.

The rising number of firearm-related deaths in children over the last decade is a concern that should be taken seriously. The correlation of increased handguns in homes during the same period of child firearm mortality rates rising poses the question of what can be done to protect these young innocents. Parents need to be aware of the dangers and consider safety measures to keep their children protected if they decide to keep firearms, especially handguns, in the home. 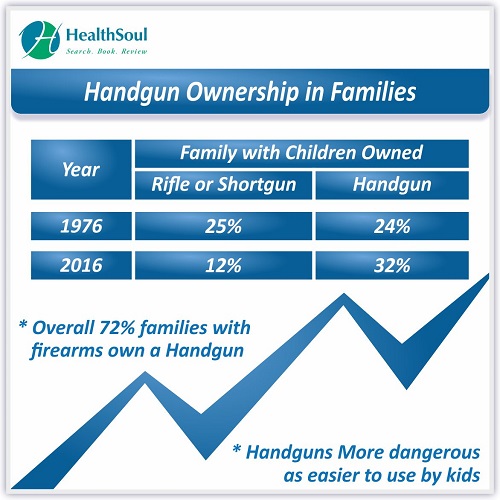