Do You Need a Rhinoplasty or Septoplasty?

When it comes to the worlds of plastic and cosmetic surgeries, many people get confused. They’re not sure what sector refers to the surgery they need and this makes it more difficult to determine what the actual surgery is called. We’re going to help clarify the difference between these industries and their nose surgeries so that you better understand what is available to you.

Before we get into the various types of nose surgeries that are out there, we must start with defining the difference between plastic and cosmetic surgery. Plastic surgery is intended to reconstruct parts of the body that have been affected by diseases or birth defects. Cosmetic surgery, on the other hand, is done to reshape or enhance parts of a person’s body.

From these explanations, you can conclude that plastic surgery is a necessity to return regular functioning to the body. Cosmetic surgery is considered an elective type of surgery that enhances appearance. It’s very important to understand the difference between elective and reconstructive as insurance providers only typically cover reconstructive surgeries.

A Brief Look At Septoplasties And Rhinoplasties

Before we dive into a deeper explanation of both these types of surgeries, let’s start with a basic viewpoint. What most people think about when it comes to the topic of nose surgery is enhancing the appearance of the nose. This is considered a rhinoplasty surgery. A septoplasty is also a nose surgery but is intended to improve the actual functionality of the nose.

While each surgery can be performed separately, they are commonly performed together. This is referred to medically as a septorhinoplasty. It’s intended to enhance the appearance of the nose and its breathing functionality. Typically, the best rhinoplasty surgeon NJ will be able to perform both types of surgeries for their patients.

A Closer Look At A Septoplasty

A septoplasty is a type of nose surgery that improves nasal breathing. It does this by correcting a deviated septum. For those who are unfamiliar, a deviated septum occurs when the wall between the two sides of the nose becomes crooked. This usually happens due to a birth defect or trauma to the nose area. With a deviated septum, many people suffer from blockage of one side of the nose. This inhibits the natural breathing process for the individual.

The whole point of the septoplasty is to straighten out the deviated septum and allow an opening for air to pass through the nasal cavity for breathing. When undergoing solely a septoplasty, there’s no noticeable change in the outside of the nose whatsoever. This means there will be no black and blue eyes or cast placed on the nasal area. Realize this is true if you only get a septoplasty and not a septorhinoplasty. 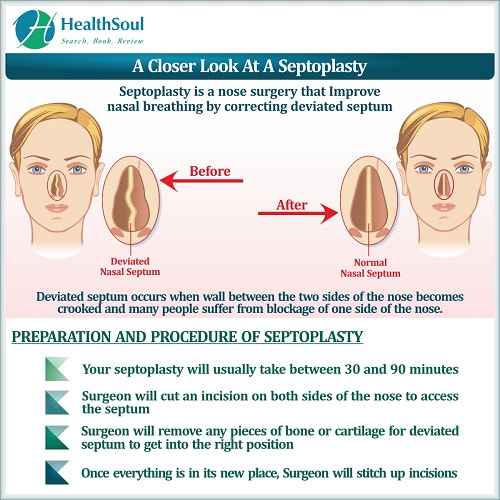 Preparing For A Septoplasty

Two weeks before undergoing your septoplasty surgery, your surgeon will likely recommend that you stop taking certain medications. These can include medications like blood thinners, aspirin, and ibuprofen. This helps to reduce your risk of any sort of excessive bleeding before the surgery.

Your septoplasty will usually take between 30 and 90 minutes. The surgeon will cut an incision on both sides of the nose to access the septum. If any pieces of bone or cartilage need to be removed for the deviated septum to get into the right position, your surgeon will do so. Once everything is in its new place, they’ll stitch up the incisions.

A Closer Look At A Rhinoplasty

As you have learned above, a rhinoplasty is a nose surgery that is solely done to enhance the appearance of the nose. This specific procedure can alter many aspects of the appearance of the nose. These include its length, width, nasal bridge, angle, nasal tip, and other types of nasal shaping aesthetic improvements. The goal of a rhinoplasty is to simply make the nose appear more balanced with the existing facial features of the individual. 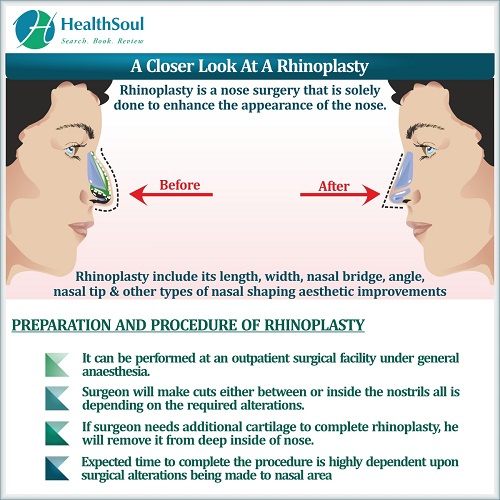 Preparing For A Rhinoplasty

When you first go to meet with a surgeon to inquire about a rhinoplasty, they’ll have a list of questions for you. They’ll want to understand what it is you want to improve with your nasal area and what your expectations are for the overall surgery. Expect to give your medical history and list of current medications that you’re on.

After a physical exam, your surgeon will recommend changes. Prepare to undergo multiple pictures so that your nose is photographed from various angles for the surgeon. Once the surgery is scheduled, they’ll advise you against taking aspirin, blood thinners, and ibuprofen for two weeks before the surgery date.

Most rhinoplasties can be performed at an outpatient surgical facility or a doctor’s office. Under local or general anesthesia, your surgeon will make cuts either between the nostrils or inside of them depending on the physical alterations that need to be made. If the surgeon needs additional cartilage to complete your rhinoplasty, they will remove it from your inner ear or deep inside of your nose.

You can expect the procedure to last for about one to two hours. Again, this is going to be highly dependent on the surgical alterations being made to your nasal area. In some rare complex situations, surgery may last longer than four hours. Your surgeon should be able to give you a decent estimate of time before undergoing the surgery.

Hopefully, you have a better idea of the differences between what a rhinoplasty is and a septoplasty. Most insurance companies will cover a septoplasty as it’s essential to correcting the normal functioning of your body. A rhinoplasty, on the other hand, likely won’t be covered. It’s best to talk with a local surgeon to learn more about these procedures.