A cochlear implant is a small electronic device that provides a sense of hearing to a person who is suffering from hearing loss that cannot be helped by a hearing aid. These people are either profoundly deaf or severely hard of hearing. It works differently from hearing aid as it doesn’t restore normal hearing but it provides some representation of sound present in the environment which would help to understand speech. Therapy courses are required to understand and learn the interpretation of various sounds after implantation.

Those people are eligible for cochlear implants who have damaged inner ear that and lost the ability to convert sound signals into electric signals which nerves can carry up to the brain or people who have intact inner year but still they are not able to relay the sound to the inner portion of the ear. Therefore, the criteria for selecting people for cochlear implantation are:

According to the FDA, children as young as 12 months are eligible to get cochlear implants. Some adults who have lost their hearing capability later in the life can also get benefit from cochlear implants. Eligibility depends upon many other factors too. So, it is important to have a proper consultation with a healthcare professional because it requires audiological, psychological testing as well as medical exams and imaging. 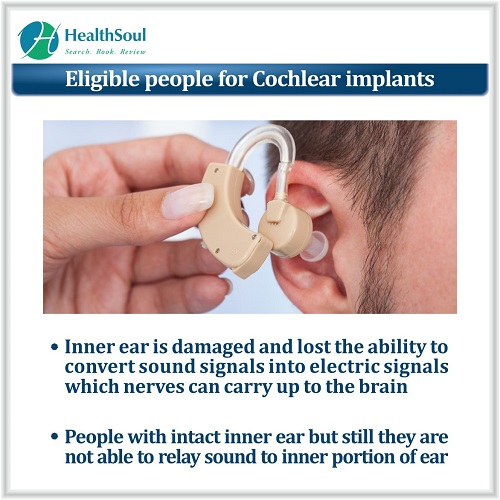 How does it work?

A cochlear implant consists of an external component similar to a hearing aid which is visible on the outside and internal portion that is surgically placed under the skin.

The external portion consists of

The internal portion consists of

In a normal hearing individual, the sounds signals captured by the external ear are converted into the electric signals with the help of the internal ear. Then these electric signals are carried by the hearing nerve to the brain for understanding. Hearing aid simply amplifies sounds so that external ear can easily captures it but a cochlear implant works very differently from the hearing aid. The implant itself takes over the function of external and internal ear by directly stimulating the hearing nerve. Since the normal biology is bypassed through the help of cochlear implants, therefore, hearing through the cochlear implant is different from the normal hearing. It requires time and therapy to learn and understand the sense of hearing as well as speech. 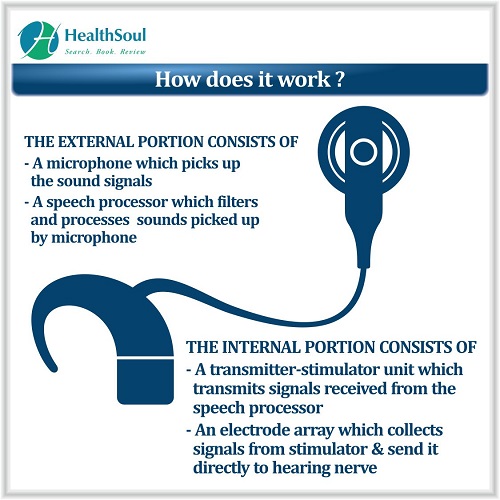 Since getting a cochlear implant is a surgical procedure, the patients are checked to identify any congenital malformations, evaluate the patency of the cochlea, risk of infections. It is ensured that an educational rehabilitation program is available that focusses on the auditory and verbal skills of the patient. 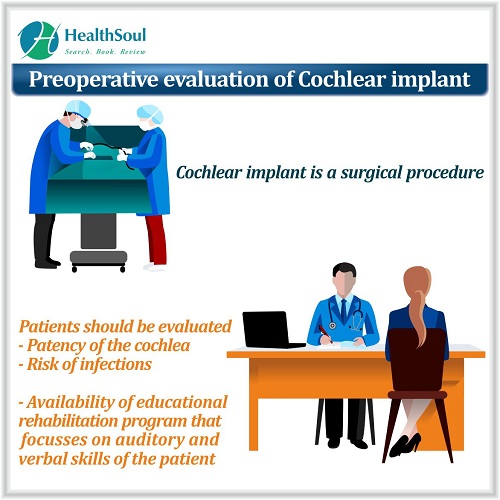 It involves training the brain for the sound waves which are present in the environment. Since normal sound waves are different from what it is perceived through the cochlear implants, therefore the brain needs time to differentiate between various types of sounds and what these sounds mean. 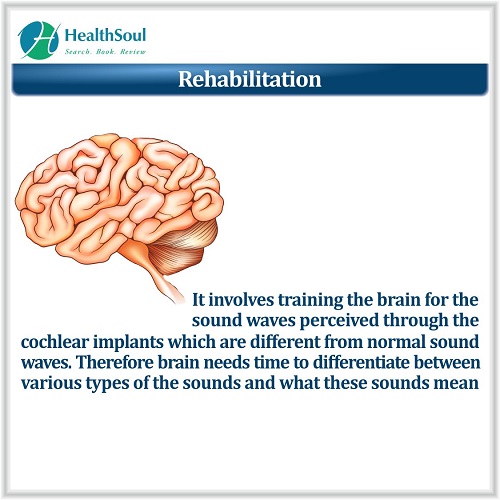 The long-term outcome is based on the age of implantation and the time period between the hearing loss and the implantation. Children who receive a cochlear implant at a younger age followed by a regular rehabilitation program perform better than the children receiving at an older age. Adults who learned language before losing their hearing have greater success with the cochlear implants as compared to the those who had not developed language before losing their hearing abilities.