It is well-established that smoking cigarettes increases risk for cancer. Most people understand that smoking tobacco will increase their chance of cancer, but the link between alcohol and cancer is not as widely known. A recent study looked at the risk of alcohol use and cancer, creating an equivalency of risk based on cigarettes.

Complex equations based on known data for alcohol-related cancers and tobacco-related cancers were used to calculate lifetime risks for cancer. Looking at the lifestyle factors of those who used tobacco or alcohol helped determine the results for both genders. When the study was completed, it was determined that drinking one bottle of wine per week had an increase in risk for cancer. When compared to cigarette use, the results by gender were:

The risk to women was greater, but both genders had a marked increase in the risk of cancer from regular alcohol use. The study shows that even less than a glass of wine a day can affect cancer risks in those who have refrained from smoking cigarettes.

The purpose of this study was to build more awareness of cancer risks with alcohol. While there have been many public awareness campaigns on the dangers of tobacco, there has been less information shared about alcohol risks, especially with cancer. While the risk of cancer is significantly less than tobacco, even minimal alcohol use was correlated with an increased risk for certain types of cancer. Specifically, women had an increased risk for breast cancer with alcohol use.

Misinformation has been perpetuated about the use of alcohol and health, including that alcohol use could have health benefits. It is important to understand that there are health risks, including cancer risks, that have been linked to alcohol. 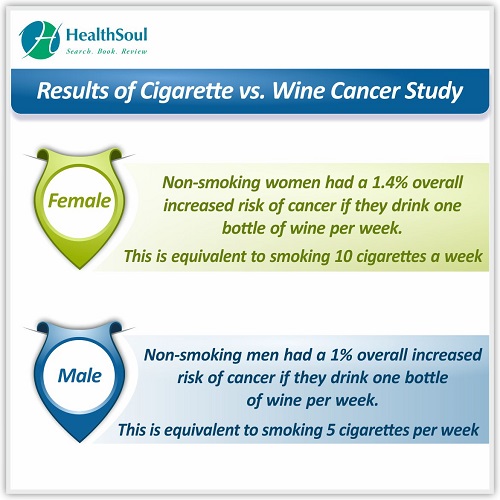