Apraxia is a medical illness on which a person is not able to use his or her muscle due to some neurological disorder. The person can not carry out skilled or fine learned movements despite having normal muscle and physical ability to do so which means that both the desire and the capacity to move are present but the person cannot execute the movement. This inability is not due to paralysis or any weakness. There are several types of apraxia depending upon which movements a person cannot do. When the illness is in milder form it is called as dyspraxia.

Orofacial apraxia: this is the most common apraxia in which the patient is not able to carry out facial movements such as whistling, licking lips, coughing or winking.

Apraxia of speech: the person is not able to speak properly because it is impossible or difficult to move the mouth and tongue to speak. It is different from disorders like aphasia where there is problem with language comprehension. It is of further two types, one is developmental apraxia of speech which is present from birth. The majority of children can improve with the correct treatment. Another type which can be seen in the people of all age groups is called as acquired apraxia of speech.

Limb-kinetic apraxia: person is unable to make fine and precise movements of arm or leg

Ideomotor apraxia: the person is unable to make the proper set of movements after listening to the verbal command

Constructional apraxia: the person is not able to copy, draw or construct simple geometrical figures.

Oculomotor apraxia: it is difficult to move the eyeballs 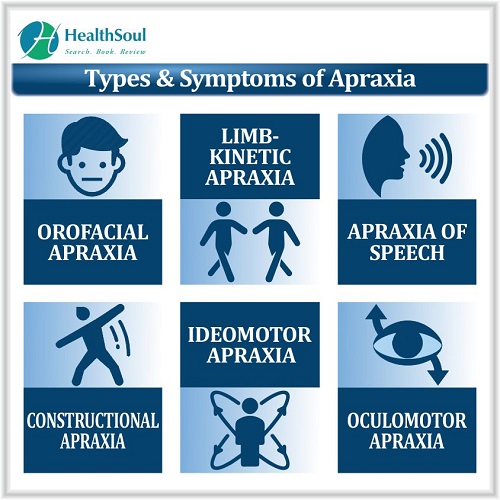 Apraxia is a poorly understood neurological disorder but studies have shown that it is caused by a defect in the neural pathway of the brain that contains the learned patterns of movement. The part of the brain where this neural pathway is located is known as the parietal lobule. This part of brain stores 3-dimensional representation of patterns and movements that we have learned. It is believed that the person suffering from apraxia are not able to access these stored skilled movements.

The defect can be caused by metabolic, neurologic or other disorders that involve that particular part of the brain like

Congenital: when a child is born with apraxia, it is usually due to malformation in the brain. Children can suffer from apraxia of speech. Some apraxia are inherited too.

Tissue or cellular damage: the specific part of the brain can get damaged due to stroke, tumors, wounds or dementia. It can result in apraxia. If apraxia is due to stroke, it may cure on its own. 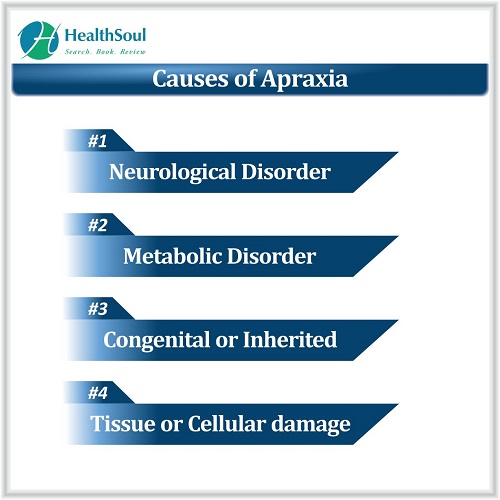 It is seen that patients may be unaware of their defects so the clinicians have to listen to both the patients and their caregivers. Your physician can use various test like

Physical examination: There are various physical test which can be used to diagnose the condition depending upon the type of apraxia. Sometimes it involves giving a motor task to the patient and observing the patient activities.

Imaging studies: CT scan or MRI can be used to visualize any mass lesion or any other sign in the brain in the suspected cases of apraxia

There is no reliable test available to diagnose apraxia of speech in very young children. Many times, it is a diagnosis of exclusion. The experts may look for the other symptoms which are related to other disorders like weakness or defects in language comprehension. There presence may help to rule out apraxia. 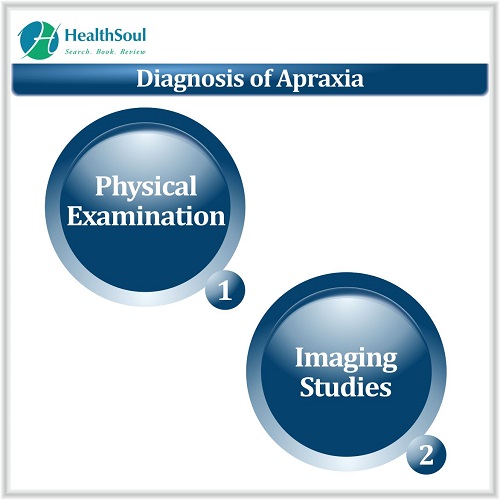 When apraxia is a symptom of the underlying cause, the cause should be treated first. Otherwise, the treatment for individuals with apraxia includes physical, speech or occupational therapy. Some cases of acquired apraxia may resolve spontaneously. The children suffering from the developmental apraxia of speech can learn or perform much better as they grow older with the help of physical therapy and special education, they cannot improve without treatment.

It is believed by many experts that sign language is beneficial for the children who are difficult being understood and it should be accompanied by routine practice of necessary movements with their mouths.  It may also be beneficial for people who have acquired apraxia. Assistive electronic devices like the computer can be used to produce sentences and words

Prognosis: the outcome for an individual depends upon the underlying cause. Some shows great improvement and while some improves very little. Many times, patients with apraxia becomes dependent upon others and require some degree of supervision. Patients who have acquired apraxia due to stroke may have a stable course and may even improve spontaneously. Patients suffering from degenerative changes and tumors have a poorer prognosis as they show an increase level of dependence. 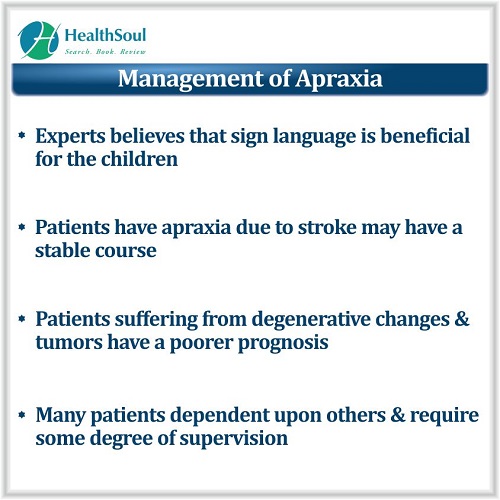